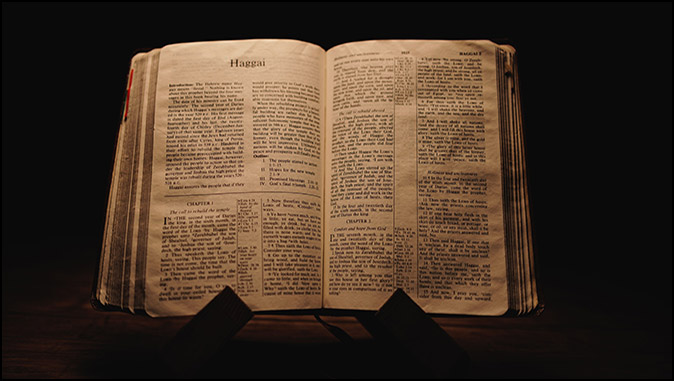 Haggai served as the Lord’s Prophet to Israel for only four months, beginning on August 29, 520 BC and ending on Dec. 18 of the same year. He spoke to the Israelites who had returned from Babylon in 538 BC to rebuild the Temple in Jerusalem and re-establish a Jewish presence there.

The first thing the Lord had Haggai tell them was the reason why their labors over much of the 18 years since their return had not been productive. It was because their priorities were out of order. He promised that as soon as they corrected this mistake, the Lord would begin to bless them, to a degree they couldn’t have imagined. The very day they took action on his instructions things started changing for the better.

Chapter 1.  A Call to Build the House of the LORD

In the second year of King Darius, on the first day of the sixth month, (Aug. 29, 520 BC) the word of the LORD came through the prophet Haggai to Zerubbabel son of Shealtiel, governor of Judah, and to Joshua son of Jehozadak, the high priest:

This is what the LORD Almighty says: “These people say, ‘The time has not yet come for the LORD’s house to be built.’ “

Then the word of the LORD came through the prophet Haggai: “Is it a time for you yourselves to be living in your paneled houses, while this house remains a ruin?”

Now this is what the LORD Almighty says: “Give careful thought to your ways. You have planted much, but have harvested little. You eat, but never have enough. You drink, but never have your fill. You put on clothes, but are not warm. You earn wages, only to put them in a purse with holes in it.”

This is what the LORD Almighty says: “Give careful thought to your ways. Go up into the mountains and bring down timber and build the house, so that I may take pleasure in it and be honored,” says the LORD.

“You expected much, but see, it turned out to be little. What you brought home, I blew away. Why?” declares the LORD Almighty. “Because of my house, which remains a ruin, while each of you is busy with his own house. Therefore, because of you the heavens have withheld their dew and the earth its crops. I called for a drought on the fields and the mountains, on the grain, the new wine, the oil and whatever the ground produces, on men and cattle, and on the labor of your hands.”

Then Haggai, the LORD’s messenger, gave this message of the LORD to the people: “I am with you,” declares the LORD. So the LORD stirred up the spirit of Zerubbabel son of Shealtiel, governor of Judah, and the spirit of Joshua son of Jehozadak, the high priest, and the spirit of the whole remnant of the people. They came and began to work on the house of the LORD Almighty, their God, on the twenty-fourth day of the sixth month in the second year of King Darius. (Sept 15, 520 BC) (Haggai 1)

When Cyrus the Persian defeated Babylon and freed the Jews to return to Jerusalem, only about 50,000 took advantage of his offer. Immediately upon arriving they began work on the Temple and two years later finished its foundation amid great celebration. It was 536 BC.

But then their enthusiasm waned, partly because of regular attacks from neighboring countries who feared a thriving Jewish nation in their midst again and did their best to run them off. This interference caused the Jews to start wondering if they’d stepped out ahead of the Lord. Maybe He was trying to tell them that it wasn’t His time yet.

So they stopped work on the Temple and instead began to focus on building their own houses, planting crops, and restoring normal life. But though they had labored long and hard during the ensuing 16 years, they weren’t getting anywhere. Then Haggai explained the problem to them. Finish the Lord’s house first, he said, and everything else would work out too.

Haggai’s admonition to the Israelites is strikingly similar to our Lord’s promise to us. Don’t worry about what you’re going to eat or drink or wear, He said. The Lord knows you need these things. But seek first His Kingdom and His Righteousness and all these things will be given you as well. (Matt. 6:31-33)

The More Things Change, The More They Stay The Same

The parallel between the two messages reveals more evidence of how things that are external and physical in the Old Testament become internal and spiritual in the New. To experience the abundant life they desired, the Israelites were admonished to make the Lord’s Temple their first priority again in spite of interference from their enemies. We also want an abundant life, and in this age, we are His Temple. The enemies that distract us are the pressures of our complex lives. Have we also built our foundation amidst great celebration and then left it alone while we succumbed to the lure of worldly goals?

If, after our salvation experience and the period of spiritual high that followed, we descended slowly back to normal until now we’re more focused on what we want for ourselves than what He wants for us, then that’s exactly what we’ve done. And if all our labor in life hasn’t brought us the fulfillment we’ve been seeking, maybe it’s because we haven’t yet built a house fit for Him to dwell in. Maybe it’s time for us to re-order our priorities, too.

The salvation experience is only the beginning of our walk with the Lord, not its culmination. It’s the foundation for all that will come after. Paul wrote, “By the grace God has given me, I laid a foundation as an expert builder, and someone else is building on it. But each one should be careful how he builds. For no one can lay any foundation other than the one already laid, which is Jesus Christ.” – (1 Corinthians 3:10-11)

You Gotta Give It Up To Get It

To experience the abundant life that we desire, we have to erect a Temple on the foundation we’ve built. We do this by choosing to make Jesus Lord of our lives, just as we chose to make Him Savior of our souls. Paul also wrote, “God is working everything together for the good of those who love Him and are called according to His purpose.” (Romans 8:28) It’s another version of Haggai’s message. The key is the Greek word translated love here. It’s agapeo and it means to be totally given over to the object of one’s affection. Stated another way, it means that if we want the Lord to work everything together for our good, we need to be totally given over to Him. In other words, we have to yield control of our lives to Him. Have we?

Here’s how you can tell for yourself. Count the number of times you consult with Him each day, how often you seek His advice, His opinion, His permission. When faced with a decision, do you wait for His input before you act? Do you thank Him for every beneficial thing that happens, no matter how small? Do you listen for His voice in quiet moments? Do you see His hand in the beauty of Creation? Do you continue in faith the task he’s set before you even in the face of resistance from the enemy?

If you’re not happy with your answers, here’s more advice from Paul. “Therefore, I urge you, brothers, in view of God’s mercy, to offer your bodies as living sacrifices, holy and pleasing to God—this is your spiritual act of worship. Do not conform any longer to the pattern of this world, but be transformed by the renewing of your mind. Then you will be able to test and approve what God’s will is — his good, pleasing and perfect will.” (Romans 12:1-2)

Offering your body as a living sacrifice means placing your life on the altar for Him to use as He pleases. It’s the only way to discover His will for you. In view of His mercy, you know there’s very little risk involved, but the rewards are beyond comprehension. Start today to make Him Lord of your life. He’s promised to make it better than you could ever dream possible.

Next time, we’ll see that as soon as the Israelites began working on the Temple again they were blessed in every area of their lives just as Haggai had promised them. Powerful kings supported their cause, and their enemies were kept at bay, for “when a man’s ways are pleasing to the LORD, he makes even his enemies live at peace with him.” (Prov. 16:7) Their work began to produce the results they sought, their progress was evident to all, and the abundant life they desired was theirs.

In our previous series on Habakkuk, we learned that the believer’s only security during the difficult times ahead will come from God, not man. “The righteous will live by faith”, we’re told. (Habakkuk 2:4) Beginning now to make Him Lord of our lives is the best possible way to grow the faith we’ll need for the challenges we’ll surely face. And it may be the only thing that keeps us secure as the deterioration of our world becomes more and more pronounced in these last days.