Haggai on the Power of Repentance
By Nathan Jones

Is there power in repentance?

I believe if you read the following excerpt from my new book, co-authored with Steve Howell, titled 12 Faith Journeys of the Minor Prophets (available on our website and on Kindle and Nook), you will marvel at the similarities between the people of Israel in the Prophet Haggai’s time and God’s people today when asking that very same question. 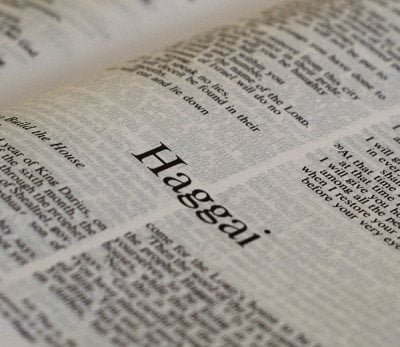 The Minor Prophet Haggai proves to be an ideal person to teach about the power of repentance. His message loomed large for the Jewish post-exilic community — the Jews who came back home from Babylonian captivity.

Back in 586 B.C., Jerusalem had been destroyed by the Babylonian siege. God’s temple had been demolished, the city decimated, and the people exiled to Babylon for a seventy-year period.

God allowed them to remain in captivity during this time as a lesson to the nation, but He still remained faithful to His covenant promises. After the Babylonian empire was overtaken by the Persians, God motivated the new Persian king to decree that the Jews could return to their homeland in order to rebuild the Temple (2 Chronicles 36:22-23).

By 538 B.C., a remnant of Jews returned. Things went well initially. The Jews quickly completed the foundation of the Temple. But then, opposition came from others who lived in that area. The enemies of the Jews began intimidating the Jews and frustrating their work. The Temple rebuilding project was forcibly ceased and left unfinished. The Temple’s foundation sat in Jerusalem for years, a memorial to incomplete projects and misplace priorities.

It was now the end of August 520 BC, just before the start of the harvest. While this should be a time of excited anticipation, it is looking more like a time of dread. The crops were suffering because of a severe drought and a general poverty seemed to have seized the people. They are underfed, unquenched, and unable to pay for adequate clothes or services (Haggai 1:6). They could hardly scrape together enough to sustain themselves, let alone prosper.

The people would have been wondering “Why?” and the Prophet Haggai felt led to provide God’s answer. Haggai pointed out that the people had given up on the rebuilding project and were saying, “The time has not come, the time that the LORD’s house should be built” (1:2).

In other words, the Jews had rationalized their failure to finish the Temple and decided it could sit on the backburner. So, instead of focusing on God and making Him their priority, the people were instead building their own residences. The governor could live in a paneled house, yet God’s house was in shambles.

Because of this backwards thinking and misplaced priorities, God had withheld blessings from his people. Since they focused on their own priorities instead of His, God had resorted to economic judgments to challenge His people to focus on spiritual realities instead of physical realities, but they had not paid attention.

Negative responses to other prophets’ messages had produced an expectation of more failure on the part of the people, but the Jews here decided to respond positively to Haggai’s blunt message when he cried out, “Consider your ways!” (1:5). “…All the remnant of the people obeyed the voice of the LORD their God, and the words of Haggai the prophet… and the people feared the presence of the LORD” (1:12).

Within 23 days of Haggai’s message, the people had resumed construction of the Temple. The people in a very short stretch of time had assembled plans, agreed to an order of building, attained workers, and acquired materials. Amazing! Though guilty, they did not wallow in despair. Instead, they repented and took action.

Strength to Carry On

A little less than one month after the start of the project, morale began to suffer because it became clear that this Temple was not going to be on par with its predecessor. The Temple built by Solomon was built from the finest materials around. It was a gleaming structure, an architectural wonder. This new incarnation, though, was a modest reconstruction, merely functional and not beautiful.

Still, God told all the leaders and the people to “Be strong!” and “Work, for I am with you!” (2:4). God provided encouragement and motivation to the people during their time of despair. He reminded them that this temple, while less impressive structurally than its predecessor, was approved by God Himself.

God’s perspective on the Temple was that its outward appearance was less important than the working of His own Spirit. God had plans to make this temple more glorious. In fact, history shows that resources poured in from the nations later to upgrade the Temple so that the Second Temple overshadowed the First Temple. This new and upgraded Temple was also going to see a new and upgraded Presence, as Jesus Himself would set foot there several centuries later.

The nation had suffered during its harvest because the attitude of selfishness had spread like uncleanliness. They were afflicted with crop failures and poor harvests because of their own actions and attitudes. God caused their agricultural and economic disaster, but it was a direct result of the people’s choices. Now, however, things will be different. “From this day I will bless you,” God promised (2:19). Finding no more guilt due to the people’s obedient response to His messages, God began to open up blessings upon them.

The guilt of the people in this matter was finally pushed aside. Its impact on the people and the leadership gave way to forgiveness and blessing. Their positive response to the preaching of Haggai shows us that the best responses when we are guilty of sin are simple yet effective: repent and obey. There is indeed power in repentance!