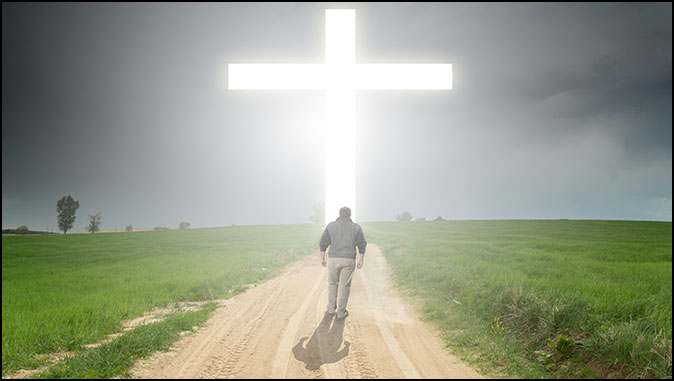 “If you have faith as small as a mustard seed, you can say to this mulberry tree, ‘Be uprooted and planted in the sea,’ and it will obey you.” – Luke 17:6

Abraham had waited 20 years for the son God had promised him. He and Sarah even had a son with the help of a surrogate mother, but the Lord had told him Ishmael was not the son He had promised.  Finally Isaac was born, the one through whom God would bless all mankind (Genesis 21:12).  But some years later, before any of these blessings came to pass, God directed Abraham to sacrifice Isaac as a burnt offering. Though heart broken, Abraham took Isaac to the place the Lord had picked out, built an altar there and placed his son upon it (Genesis 22:1-10).

The Prophet Elijah was beside himself. The Israelites kept vacillating between worshiping God and Baal. Their indecision was driving him crazy and he let them know it. “How long will you waver between two opinions? If God be God then worship Him. But if it’s Baal, then worship him.” After much prayer he arranged a public demonstration. Challenging the priests of Baal to a contest, he had two altars built and two bulls slaughtered and placed on the altars. The people gathered to watch. Then he told them that whichever god sent down fire to consume the offering is the one they should worship. Everyone agreed, and the priests of Baal began calling their god.

All morning long they danced, cut themselves with knives as part of their religious ritual and called out to Baal.  During the afternoon Elijah began taunting them, suggesting their god was perhaps busy or traveling or in the bathroom, and they became even more ecstatic in their worship, but alas, no fire. Then about sunset Elijah had his altar doused in water three times and began to pray, reminding God of their earlier agreement (1 Kings 18:16-37).

The court was in a panic. The King of Babylon had just ordered the execution of all his advisers for failing to interpret a dream. Daniel, like the calm in the midst of a raging storm, promised the King’s assistant that he would interpret the King’s dream, thus saving the lives of all the advisers. Then he ran home to pray with his friends. He hadn’t a clue as to what the dream was or what it meant, and was counting the Lord to tell him (Daniel 2:1-18).

I think it was Josh MacDowell who said we don’t have to check our brains at the church door to worship God.  Christianity is a thinking person’s religion, and our Lord expects us to use the intellect He has so generously given us. The examples I’ve given above are meant to illustrate that point.

When Abraham took Isaac to Mt. Moriah, he reasoned that since God had said all His promised blessings to Abraham’s descendants would flow through Isaac, then if Abraham sacrificed him there, God would have to raise him from the dead (Hebrews 11:17-19). He knew that God could not break the covenant promise He had made. As he placed Isaac on the altar, God stopped him and told him to use a ram that was caught in a nearby thicket instead. Then Abraham and Isaac understood that they were acting out a prophecy of the time when the Lord would offer His only Son as a sacrifice for sin on that same spot. Abraham named the place “Jehovah Jireh” the Lord will provide, and from then on it was said, “On the mountain of the Lord it will be provided” (Genesis 22:11-14).

When Elijah received his directions during a private prayer, he reasoned that God, Who longed for the Israelites to come back to Him, would not embarrass him in public (1 Kings 18:36). His faith in God’s integrity allowed him to officiate over one of the greatest grandstand plays of all time. When he began praying, God sent the fire and it consumed the sacrifice, the altar, the water and even the stones around it. The Israelites turned back to God and a three-year drought that God had sent as a judgment on the people ended that very day (1 Kings 18:38-46).

Daniel was a prince in Israel, one of those in the line of succession for David’s throne, when at about age 16 he was taken hostage to Babylon. The year was 605 BC and Babylonian King Nebuchnezzar had just defeated Egypt and Assyria, making him ruler of the world. After laying siege to Jerusalem, he took Daniel, his three friends, and some others hostage to assure the compliance of the now vassal King of Israel.

Once in Babylon, the King put the Jewish teenagers into a training program, as was his custom with foreign royalty, to teach them the Babylonian system and culture. The King was impressed with their intelligence and when they graduated, he appointed them to his body of advisers. When the senior members of this group couldn’t interpret the King’s dream, he issued an extermination order for the entire group.

Daniel reasoned that God hadn’t put him in such an influential position with the Babylonian King just to see him executed, so he took a leap of faith by telling the King’s assistant that he could interpret the dream. And sure enough, after the prayer session with his three friends, the Lord gave Daniel the interpretation in a vision (Daniel 2:19). The King was so impressed that he elevated Daniel to ruler over the entire province of Babylon and head of all his advisers. Daniel’s three friends were named chief administrators over the province of Babylon (Daniel 2:48-49).

Some time later these three, who we know as Sahdrach, Meshach, and Abednego were sentenced to death for refusing to worship a pagan idol the King had fashioned. They reasoned that God could save them from the punishment due them but even if He didn’t, it was better to die in faith than live in idolatry (Daniel 3:16-18). Bound and thrown into a roaring furnace, they were joined there by one whose form was like the Son of God. When the King called them out, only the ropes that had bound them were burned. The King published an edict requiring all his subjects to honor the God of Israel (Daniel 3:19-30).

Many years later, when he was an old man, Daniel himself was accused of refusing to worship the King. At sunset he was thrown into a den of hungry lions as punishment. All night long he sat there while the lions got hungrier and hungrier. Daniel’s moment by moment faith sustained him until morning when the King released him, again honoring the God of Israel (Daniel 6:16-23).

Daniel and his friends reasoned that the God Whom they honored with their faithfulness would not dishonor them by withholding His.

These children’s stories always encourage me and I could go on talking about them until you stop me. But my point here is to draw attention to one fact. In each case, the people involved had to think their way through a pretty serious situation. And when all their emotions screamed for them to act one way, they applied a huge dose of reason to justify acting differently.

In doing so they demonstrated four tools for us to apply when facing a faith-testing situation. We’ll call them the Four Factors of Faith.

1.They knew God’s will and understood His ways.

2.Their leap of faith was based on sound reasoning.

3.They asked His help early and often.

4.They trusted Him for a successful conclusion.

Based on man’s definition of the word, there was nothing reasonable about the faith of these men, and that’s why I didn’t title this study “A Reasonable Faith.” A faith grounded in reason is extreme in every sense of the word. In fact, most would call it unreasonable.  But it’s the kind of faith that’s available to us for use when circumstances require it.

When Jairus, the synagogue ruler, was told not to bother Jesus anymore about healing his daughter because she had died, the Lord told him, “Don’t be afraid, just believe, and she will be healed”. He did and she was (Luke 8:49-56).

When the disciples told Jesus they only had five loaves of barley bread and two small fish to feed as many as 10,000 people (Matt. 14:21), Jesus gave thanks and told them to start passing the food around. They did and there was enough left over after everyone was finished eating to fill 12 baskets. (Mark 6:32-44)

These are not reasonable requests to make. And yet the Lord made them, giving each one the faith to obey, and seeing them safely through the situation.

But the most unreasonable thing of all is the one He reserved for us. He tells us to believe that He became a man, lived a sinless life, and died for all the sins of mankind. Then He rose from the grave to walk among His followers again. He did all this to purchase a pardon that He’s promised to grant without condition or exception to all who choose to accept it. Finally He invested us with the faith to trust Him in this, the most important choice we’ll ever make (Ephe. 2:8-9), and promised to see us safely through to a successful conclusion, eternal life with Him.

If you’re reading this article, you’ve probably made that choice. And that means you’re betting your eternal destiny on Him. You’re OK with this because you understand His will and know His ways. Therefore, your leap of faith is based on reason. You pray often, and are trusting Him for the successful conclusion He promised.  The Four Factors of Faith make yours a faith grounded in reason.

“Now it is God who makes both us and you stand firm in Christ. He anointed us, set his seal of ownership on us, and put his Spirit in our hearts as a deposit, guaranteeing what is to come” (2 Cor. 1:21-22).

All Things New: Why Is the Old Testament Important?

All Things New: Why Is the Old Testament Important? By Tim Moore The Bible Jesus…

All Things New: Should We Cut the Old Testament Loose?

All Things New: Should We Cut the Old Testament Loose? By Tim Moore Have you…

Blessed Is He Whose Hope Is In The Lord