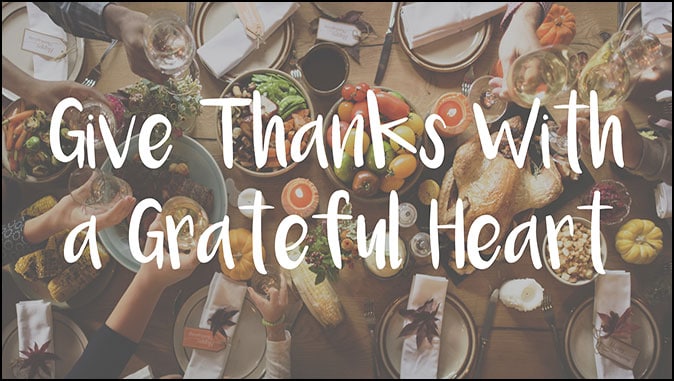 Every year at Thanksgiving I’m reminded of the holiday’s origin, the Jewish Feast of Tabernacles. It was the crowning event in Israel’s cycle of fall feasts that also included Rosh Hashanah and Yom Kippur. It was a celebration of the harvest, of God’s mercy in forgiving their sins for another year, and a remembrance of the time when He lived among them in the wilderness, setting them apart as His people.

When the Pilgrims had experienced their first successful harvest in the New World, they decided to give thanks for the Lord’s provision, even though half of them had died in the year since their arrival. Inviting the neighboring natives to join them, they held a three-day celebration patterned after their knowledge of the Feast of Tabernacles.

Here’s How It All Began

The Jews were about to enter the Promised Land. The Lord had Moses tell them that in the future they were to set aside a tithe (1/10th) of their production each year and bring it, along with all their other voluntary offerings, to the place He would choose for them to worship Him. They were to eat them there in a gigantic national feast. Think of it, 1/10th of all the lambs, goats and cattle born that year, 1/10th of the grain, vegetables and fruit from through out the land, breads and cakes and barrels of wine.

Each fall, after the harvest, everyone in Israel came to Jerusalem to celebrate. It was the biggest Thanksgiving dinner ever. The sounds of laughing and singing and the aroma of exotic foods filled the air for a whole week as the people gave thanks to God for blessing them (Deut. 12:8-12, 17-19).

Every third year they gave their tithes to the Levites and stayed home. This assured that there was always enough to take care of the Levites (who were the teachers and doctors and lawyers and had no land to till) and all the widows and orphans, the indigent, and the aliens among them. Each year they celebrated His provision and the Lord blessed them with more so that their abundance grew. He commanded them to do this every year so that He could “bless them in all the works of their hands.” (Deut. 14:22-29) By setting the Lord’s share aside and then using it to give thanks to Him, they found that each year their blessing increased.

But after their return from the Babylonian captivity, the Lord caught them cheating Him. He warned them that they had put themselves under a curse because they weren’t setting aside their tithes properly. They were giving the Lord their worst, not their best, and even this was being done resentfully as if it was a great burden. Because of this they were not being blessed but were working harder and harder for less and less. “Return to me and I’ll return to you,” He told them. “Bring the whole tithe into the storehouse. Test me in this and see if I don’t throw open the flood gates of Heaven and pour our so much blessing that you won’t have room enough for it.” (Malachi 1 & 3:7-10)

And that’s always the way it is with the Lord. No hard feelings, no resentment, just return to Him and He’ll return to you. All is forgiven, because His mercies are new every morning. We can always begin right where we are and He’ll respond as if the past had never happened.

The Rules Of The Game

So by these two passages we learn the rules of what I call God’s Blessing Game. We show our gratitude by giving God His due and He blesses us with more. We increase our giving and He increases His blessing, allowing us to give still more. And on it goes. But when we become stingy or resentful and try to short-change God, then the blessings are curtailed accordingly.

The Israelites proved beyond all doubt that by following the rules of the game they could win every time. And they demonstrated the futility of cheating. But is there any New Testament version of God’s Blessing Game? Of course there is, because God is the same yesterday today and forever. Luke 6:38 tells us “Give, and it will be given to you. A good measure, pressed down, shaken together and running over, will be poured into your lap. For with the measure you use, it will be measured to you.”

Show a little gratitude and get a little blessing. Show a little more and the blessings increase. The more generous we become the more abundant our blessings will be. Paul gave us the ultimate outcome in 2 Cor. 9:11. You’ll be made rich in every way so you can be generous on every occasion. Every time we feel moved to help someone out, we’ll find the money’s there to do it. And it will all result in thanksgiving to God.

Lots of people overlook the last half of this promise, and find that because they do it doesn’t come true. The Lord didn’t promise to make us rich so that we could have bigger houses and more cars, He promised to make us rich so that we could be more generous. As one commentator has put it, “God’s blessings are not to increase our standard of living. but to increase our standard of giving.”   We’re supposed to be a distribution center for His blessings, not a warehouse.  The blessings we receive are supposed to flow through to others, not stop with us. The riches we store up are for Heaven, not Earth. Good thing too, because here they only last a little while, but there they last forever. (Matt. 6:19-20)

This is God’s Blessing Game. It’s a game that He developed and that everyone can win. The rules are clear and don’t ever change. We establish the level of blessings we’ll receive by the gratitude we express through our generosity toward others.  The Lord loves a cheerful giver and will reward us accordingly.

So the Pilgrims decided to take a lesson from the Israelites. They took the little they had and gave thanks, inviting the natives in their midst to join them to show their generosity. In return the Lord blessed them. And so it began. To one degree or another, it’s been going on ever since and look how we’ve been blessed. Americans are the richest people on Earth.  If you don’t believe that, try living somewhere else, anywhere else, for a while.

It’s a testimony to God’s understanding of the human condition that the Thanksgiving Holiday’s roots have been obscured. You see, he longs to bless us but the rules of the game require an expression of gratitude on our part. By allowing Thanksgiving to be perceived as a secular holiday instead of a religious one, He can receive our thanks without risking the same demand that He be taken out of the loop as there is for Christmas. There’s no public outcry by the pagans, no suits by the ACLU, and no attacks by other religions against its origin. Very few people are even aware of the Biblical roots of this “American” holiday. But being devout Christians, the Pilgrims knew Who they were thanking, and why. You and I do, too. It’s our little secret. Ours and God’s.

I pray that your Thanksgiving is a happy one, and that through out the holidays you’ll remember the rules of God’s Blessing Game and always play to win. Selah.

The Kingdom Parables...Matthew 13 (Conclusion) By Jack Kelley In our 4th and concluding article on…

The Kingdom Parables...Matthew 13 (Part 3) By Jack Kelley In part 3 of our series…

The Kingdom Parables...Matthew 13 (Part 1) By Jack Kelley It occurred to me after reviewing…

Our Glorious Future By Jonathan C. Brentner Perhaps you wonder why I’m writing about glory…

The Great Harvest By Randy Nettles In giving the laws for His people, God set…