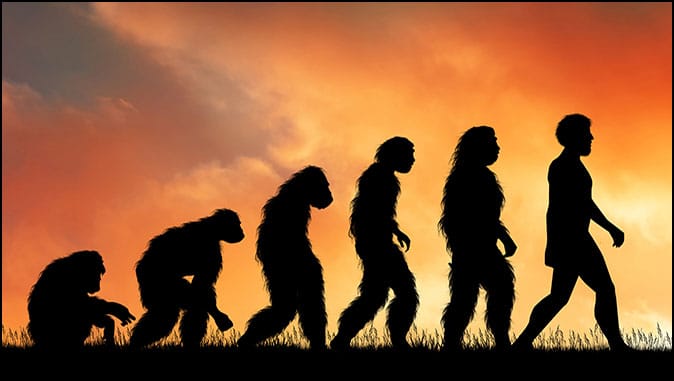 (Note: Following up on the recent evolution/ creation debate, here’s something you might not have considered.)

My wife has a teacup poodle. We bought her as a puppy almost 13 years ago. She wasn’t just a pound puppy but a pure bred, papers and all. Expensive, too. Breeders make a big issue about how they control the process to emphasize the desirable traits of the breed.

A business client of mine happened to be buying a dog at the same time. Returning home after a trip to her city, I saw her in the airport. She was meeting the very plane I was leaving on. The puppy she had bought was arriving…from Maine. “What’s the matter,” I asked, “don’t they have any German Shepherds in Montana?” She told me that the Shepherd population in Montana had developed a tendency toward arthritis, whereas the ones from Maine didn’t have that problem.

The whole theory behind selective breeding is to improve the breed. In their effort to do that the Montana breeders had also created a problem. but it got me thinking. If evolution works, why do we need selective breeding. Isn’t that manipulating the process? Left alone wouldn’t natural selection produce the desirable traits everyone wants? The simple answer is no. Left alone the dog population would soon consist solely of mongrels, and would sink to its lowest level, not soar to its highest.

The breeder has to be a kind of creator, controlling the breeding process to produce an animal that meets the specifications. It’s the same through out the domestic animal kingdom, whether it’s dogs, horses, or farm animals that produce eggs, milk, meat, or wool, man intervenes to improve the breed.

These breeders can’t create traits that don’t already exist in the gene pool. They can only select from available traits and emphasize certain ones. And that gets me thinking, too. Do you suppose breeders are really working to reverse the very effects of evolution that many of them so staunchly defend? I mean, if the desired genetic traits are already resident in the breed, then wasn’t the breed once a perfect specimen?

Is This Also True of Man?

Suppose we apply that same idea to humanity. Was man once a perfect specimen? The Bible says the first humans were created in the image of God (Gen 1:27). Later it says that Adam’s children were created in his image, not God’s (Gen 5:3). Between Adam’s creation and the procreation of his children, sin entered into the world, and all of Adam’s children inherited the sin nature.

When Cain murdered Abel, God sent him away from his people (Genesis 4:10-12). Therefore when Seth came along he could remain separate, and the Bible distinguishes between the line of Seth and the line of Cain. Then Satan introduced another breed into the equation and soon fallen angels were breeding with human women to produce a hybrid race called nephilim. As a result the human race sank to its lowest level from God’s perspective and had to be destroyed (Gen 6:5-7). God chose Noah and his family to begin the New World and make the race pure again. The Bible says Noah was perfect in his generations (Gen 6:9). That means his ancestry was uncontaminated by hybrid genes. He was a genetically pure human.

Later Seth’s descendants (sons of Abraham) were commanded to remain separate from the gentiles. Abraham told Eliazer, his chief servant, to find a bride for Isaac from among his own relatives and made him swear not to look among the Canaanites (Genesis 24:1-4). Later Isaac gave Jacob similar instructions (Genesis 28:1-2). Elaborate laws were given to the Children of Israel to maintain this separation from other races and to demonstrate the need to keep unlike kinds apart. Examples include prohibiting the planting of unlike types of seed, of yoking unlike types of animals, and of making clothing from unlike types of cloth (Deut. 22:9-11). These were models, meant to underscore the need for God’s people to remain separate from the world.

When the Children of Israel were given the Promised Land they were warned against allowing their sons and daughters to intermarry with the local people (Deut 7:3). But after the Babylonian captivity the Israelites returned to the Promised land and began to intermarry (Ezra 9:1-2). Then they remembered the Lord’s commandment against doing this and offered to make a covenant before God to send their foreign wives away. As their leader, Ezra agreed and it was done. The mingling of the holy race with the people around them stopped (Ezra 10). Because of these lessons from their history, although they’ve been scattered to the four corners of the world, the tendency of the Jewish people has been to remain separate.

Mirror, Mirror, on the Wall…

Man was created in the image of God. With Adam’s fall the image was shattered, as a mirror shatters when broken. Looking into a broken mirror you can still see pieces of your image, but it’s fragmented, no longer complete. In the same way each of Adam’s children had fragments of God’s image, but no one had it all.

Much of humanity was left to mix indiscriminately and as they did the fragments of God’s image faded even more. But from the beginning, the people who would later become the Jews were commanded to remain separate. Was God practicing selective breeding to preserve His image in man? The evidence suggests He was. Through out history in the face of overwhelming odds, the Jewish people have remained separate, never integrating into the Gentile nations among whom they were scattered. Numbering about 14 million in a world population of nearly 7 billion they comprise only .2% ( 2/10ths of one percent) of humanity. But in nearly every field of artistic, scientific, intellectual, or philanthropic endeavor you can name they are represented all out of proportion to their number and usually at or near the top. This defies coincidence.

Your Mission, If You Choose to Accept It…

The Prophet Isaiah identified the four-fold mission given to Israel by God; to be a witness for Him (Isaiah 43:20), to show forth His blessing (Isaiah 49:3), to transmit His Word (Isaiah 42:9), and to be a channel for the Messiah (Isaiah 49:5).

He said as long as they were faithful to Him He would make the world envy them, and it did. He also warned that if they rejected Him they would be a reproach to the world until they returned, and they have been. But either way, they would still be His people (Jeremiah 31:35-37).

According to the theory of evolution, which emphasizes the survival of the fittest, they should have disappeared long ago like most of their Biblical counterparts. By Divine Providence they survive as God’s most potent argument against this godless theory. They remain and are prominent today; a singular achievement among the nations of history, as a witness to God’s intervention in the affairs of man. And even when all the nations of the world unite against them, as appears to be happening now, they will emerge victorious.

“Lift up your eyes and look about you: All assemble and come to you; your sons come from afar, and your daughters are carried on the hip. Then you will look and be radiant, your heart will throb and swell with joy; the wealth on the seas will be brought to you, to you the riches of the nations will come” – (Isaiah 60:4-5).

When Kaiser Wilhelm II posed the question, “How can you prove the existence of God?” his chancellor Otto von Bismarck, a Lutheran, answered, “The Jews, your majesty, the Jews.” Selah.