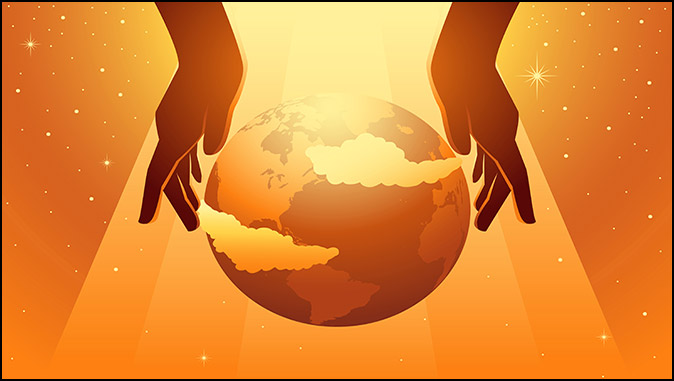 What Did God Do On The Eighth Day?
By Jack Kelley

These two verses are much different from those describing the preceding days in the creation account. All of them included the phrase “it was evening and it was morning, day…” Not so for the seventh day. Also the Hebrew word translated rested is shabath (pronounced sha-BAT). We get sabbath from this word. It appears 71 times in the Bible, and 47 of those times it’s translated “cease”. It only means rest 11 times.

Will This Day Ever End?

Now obviously, the seventh day had a beginning and an end just like all the days before and after it. But the fact that there is no mention of this in the text of the creation account indicates that in a spiritual sense this day has never ended. There is no eighth day of creation. God has never taken up the work of creation again, and that’s why a word that also means ceased was used in describing His Sabbath rest.

Now don’t accuse me of promoting the “Great Watchmaker” theory of creation. That’s the one where God created the world and all that’s in it, then set it in motion, and has been just sitting there watching it run ever since. Let’s look at what God has been doing since He stopped creating. We’ll begin in John’s Gospel.

So, because Jesus was doing these things on the Sabbath, the Jews persecuted him. Jesus said to them, “My Father is always at his work to this very day, and I, too, am working.” For this reason the Jews tried all the harder to kill him; not only was he breaking the Sabbath, but he was even calling God his own Father, making himself equal with God.

Jesus gave them this answer: “I tell you the truth, the Son can do nothing by himself; he can do only what he sees his Father doing, because whatever the Father does the Son also does.” (John 5:16-19)

This tells us that both the Father and the Son have so much to do that they work every day, even on the Sabbath. So they haven’t been just sitting around waiting. They’ve both been working every day from that day to this.

But that’s not the point. The point is this. Since the end of the 6th day, God has never again taken up the work of creation. Where the creation is concerned he has never ceased his Sabbath rest.

In Numbers 15:32-36, it reports of a man who was caught gathering wood on the Sabbath. It was a violation of the commandment, but the Israelites didn’t know what to do with him. When they inquired of God, He told them to take him outside the camp and stone him to death. God was serious about not working on the Sabbath.

But when we get to the New Testament we find that the commandment to rest on the Sabbath is the only one of the 10 Commandments not specifically repeated. In fact the most frequent reference to the 4th commandment in the New Testament concerns the Lord’s frequent and flagrant violations of it. On six different occasions, the Lord defended working on the Sabbath, each time showing the religious leaders of the day that their rules for keeping the Sabbath were man made, arbitrary, and counter to God’s purpose. For example the priests in the Temple desecrated every Sabbath by working (Matt. 12:5), and the people could water their animals (Luke 13:15) or rescue them from danger (Matt. 12:11) but they couldn’t heal a person (Luke 13:14).

In Romans 14:5 Paul taught that we have the right to either consider one day holier than the others or to regard all days the same, based on our personal convictions. And in Colossians 1:16-17 he said not to let anyone judge us in regard to a religious festival or a New Moon celebration or a Sabbath day. He said that these things were only a shadow of things that were coming, that the reality was found in Christ.

Somehow the Sabbath commandment was supposed to teach us something about our relationship with Jesus. So let’s find out what it is.

God created the Heavens and the Earth. They didn’t do anything to help, He did it all. At the end of six days, He rested (ceased) from His work because it was finished. He never again took up the work of creating. He made the seventh day, a day without end, holy. There was no eighth day. Then He created a memorial. From that time forward the seventh day was a day of rest where no work was permitted to remind us that when His work was finished He ceased working.

Since we’re trapped in the dimension of time, we can’t have any days without end. So when God set up our calendar He made every seventh day holy, and then the calendar began again. There’s never an eighth day. This was to help us to see that the seventh day, the day of rest, never ends. To underscore the importance of this, He made working on the seventh day punishable by death.

But man missed the point. We thought it was about working on the Sabbath when it was really about resting when the work is finished, and that’s how all this relates to Jesus.

Jesus came to Earth with one job to do. It was to die for the sins of the people so we could be redeemed and live forever with Him (John 1:29). He was making us into a new creation (2 Cor. 5:17). We didn’t do anything to help, He did it all. When He died on the cross, His work was done. That’s why His last words before He died were, “It is finished.” Then He bowed His head and gave up His Spirit (John 19:30).

He never had to take up the work of redemption again, for by that once-for-all-time sacrifice He has made perfect forever those who are being made holy (Hebr. 10:12-14). When He ascended into Heaven, He sat down at the right hand of the Father. The redemptive work of our new creation was finished, so He ceased working. This is why some theologians refer to the Lord’s work of redemption as His “completed” work on the cross.

What Is Our Work?

Jesus forgave all of your sins at the cross (Col 2:13-15) and therefore He saved you completely. Hebrews 7:25 confirms that He is able to do this. According to 2 Cor. 1:21-22 God has accepted responsibility for keeping you saved. He has set His seal of ownership on you and put His spirit in your heart to guarantee this. Believing that means your work of salvation is finished and you have entered into your life-long seventh day, your Sabbath rest. It means you’ve done what God requires and the work of your salvation is finished. You will inherit eternal life. “For my Father’s will is that everyone who looks to the Son and believes in him shall have eternal life, and I will raise him up at the last day.” – (John 6:40)

As we can see from the above, the folks who keep asking whether Saturday or Sunday is the correct Sabbath for Christians to keep are asking the wrong question. The real question we should all be asking is whether we are keeping our Sabbath rest or not. It doesn’t matter that you say you’re born again. If you are still working to earn or keep your salvation after saying that you’ve accepted the work Jesus did for you, then you are violating the commandment to keep the Sabbath and are subject to the penalty of the Sabbath breaker in Numbers 15. His was a physical death, but yours will be a spiritual one, because you aren’t doing the one and only work He gave you to do; you aren’t believing in the One He has sent. Instead, you’re believing in your own ability to finish the work you think He only began. And that means you aren’t saved.

There isn’t much time left for the Church. The Lord could come while you’re reading this. Please consider these things carefully. Make sure you’re really saved by grace through faith. Not by works, lest anyone boast. (Ephes. 2:8-9) Remember, to the man who does not work but trusts God who justifies the wicked, his faith is credited as righteousness (Romans 4:5). Believe in the One God sent to save you, enter your sabbath rest, and don’t ever take up the work of your salvation again.