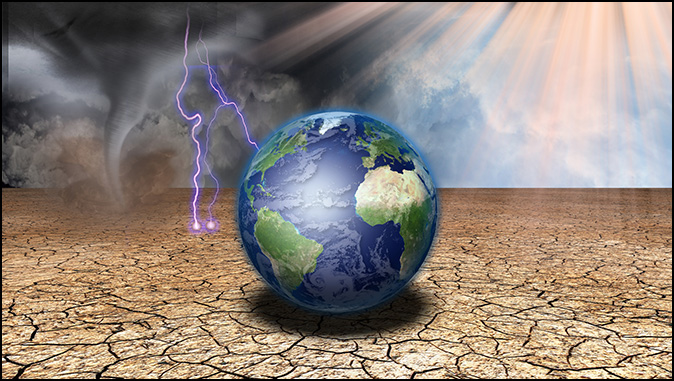 From Peace And Safety To Desolation And Destruction
By Jack Kelley

While people are saying, “Peace and safety,” destruction will come on them suddenly, as labor pains on a pregnant woman, and they will not escape” – (1 Thes. 5:3).

Like many works of man its beginning will be filled with hope and promise. Following the chaos that will accompany the rapture of the Church and the Middle East war we call the Battle of Ezekiel 38 a man will emerge, a leader like none the world has ever seen. He’ll claim to have a way to restore peace to a world that will have been shocked by the recent disappearance of millions and by the nuclear exchange that began in the Middle East and quickly spread from Europe in the west to Russia in the east.

People will be desperate for answers and multiple appearances around the world by the beautiful and tender Marian apparition will convince them that this leader has them. Among other things, she will tell them he’s her son, come to restore peace to the world. Through her supernatural influence Catholics, Muslims, New Agers, the Eastern religions and even non-believers will unite behind him and for a time it will seem like an enduring peace is finally coming to Planet Earth.

Although conditions will grow steadily worse with war, famine, and disease taking an enormous toll in parts of the world (Rev. 6-9), the vast majority will be convinced their man is equal to the task of making things right again. The Marian apparition will have persuaded them that if they all put aside their differences and unite behind him everything will soon be better than it has ever been. Her promises will be accompanied by all sorts of miracles, so convincing that they would deceive even the post-rapture believers in the real Son, if that was possible (Matt. 24:24). Before long it will seem like the whole world is united behind him, to the point where they will have even made him the object of their worship.

“Who is like him?” they’ll say, “Who could ever oppose him?” Thinking he’s the son of God, as the one who calls herself his mother has told them, they’ll also worship his father, not understanding the extent of their deception. The Luciferian doctrine will have taken hold and the post-rapture world will have been persuaded that darkness is light, and evil is good (Rev. 13:4-8). It will be Satan’s finest hour.

The judgments of God, intended as a warning to the people of Earth, will be viewed by them as attacks from a vicious enemy intent on preventing them from achieving the utopian life they’ve longed for and have been told awaits just over the horizon.

What Are These People Doing?

“Why do the nations conspire and the peoples plot in vain? The kings of the earth take their stand and the rulers gather together against the Lord and against his Anointed One. “Let us break their chains, ” they say, “and throw off their fetters.” – (Psalm 2:1-3)

For a time it will seem as if the whole world is united against God, and that overthrowing Him is actually possible. But they won’t realize Who they’re up against.

“The One enthroned in heaven laughs; the Lord scoffs at them. Then he rebukes them in his anger and terrifies them in his wrath, saying, “I have installed my King on Zion, my holy hill” – (Psalm 2:4-6)

But the euphoria won’t last long. The promise of joy and peace that brought the world to its knees in worship and adoration will have matured into the worst trouble in its history, putting them on their knees for an entirely different reason. And the unity of the supernatural powers leading them will be exposed as a sham.

Then the angel said to me, “The waters you saw, where the prostitute sits, are peoples, multitudes, nations and languages. The beast and the ten horns you saw will hate the prostitute. They will bring her to ruin and leave her naked; they will eat her flesh and burn her with fire” – (Rev. 17:15-16).

Regardless of your opinion on where the anti-Christ will come from and what his world religion will be, these verses should be puzzling to you. The woman will have brought the anti-Christ to power by persuading people from every nation to follow him. How could he turn on her and destroy her? Rev. 17:17 has the answer.

For God has put it into their hearts to accomplish his purpose by agreeing to give the beast their power to rule, until God’s words are fulfilled. God is long suffering, but there’s an end to His patience. That end will come swiftly when the anti-Christ makes the claim to be God himself (2 Thes. 2:4). Jesus said that claim will trigger the Great Tribulation, a time of distress unequaled from the beginning of the world and never to be equaled again and told the people living in Judea when it happens to get out of town fast (Matt. 24:15-21).

When the anti-Christ makes his claim to be God he’s issuing a direct challenge to the One who is God, and it will not go unanswered. God will cause him and his 10 subordinate kings to turn against the very system that brought them to power, starting with the false religion. He has long employed the forces of His enemies to do His will and it has worked every time.

An early example of this takes place in Judges 7:22, when God had Gideon reduce the army he had gathered against the Midianites from 32,000 down to just 300. With those 300 He defeated the enemy by making them turn against each other. Another example that’s still in our future but will be fresh in the minds of the post church world can be found in Ezekiel 38:21. That’s where Gog’s forces will be made to turn against each other to complete their utter defeat. (We’re never outnumbered when we’re on God’s side.)

God wants that false system destroyed and will use His sworn enemy to accomplish it. The counterfeit religion that began with Nimrod’s wife Semeramis in ancient Babylon and will be represented in the end times by the Marian apparition will be no more.

Where the apparition had sown harmony among the nations of Earth, God will cause the seeds of rebellion to sprout. The Kings of the North and South will rise up against the anti-Christ . With ethnic and religious ties, these are leaders who should have been his allies, but when the opportunity presents itself, they will rebel against him. He will no sooner finish dealing with them when reports from the north and east will alarm him (Daniel 11:40-44). He who came on the scene as a great peace maker will end up immersed in war. Satan, the power behind all these thrones, will be forced to deal with in-house bickering at the highest levels of his kingdom. Who has the ability to cause this kind of mischief? The Almighty God, that’s who, and He’s only just begun.

Daniel 11:45 tells us the anti-Christ will eventually come to his end and no one will help him. When at last the armies of Heaven invade Earth, he’ll be captured and thrown live into the lake of fire. His troops will be killed by nothing more than the words spoken from the mouth of the Lord (Rev. 19:19-21). Satan will be imprisoned in chains (Rev. 20:1-2), and this episode of man’s rebellion against God will end in defeat and judgment, just like all the previous ones.

It will begin as a beautiful dream of the utopian life to be accomplished through the unified efforts of the brotherhood of man and his supernatural benefactors. Seven short years later the world will no longer be a fit place to dwell and will have to undergo a complete spiritual and physical renewal to bring it back to the condition it was in when the first man dwelt here.

Through all this, God will have accomplished several major goals. The Church, who trusted Him to create our utopian life instead of trying to make one without Him, will be in the New Jerusalem enjoying it forever (Rev. 21:9-10,27). Israel will be back in covenant with God and flourishing in the kingdom He promised them so long ago (Isaiah 65:17-25). The Earth will have been liberated from its bondage to decay and restored it to its original condition (Romans 8:19-21, Acts 3:21). The Lord Jesus will be in His rightful place as head of a kingdom that will never be destroyed or left to another people (Daniel 2:44, Zechariah 14:9). All who dwell therein will have accepted Him as their Lord and Savior (Matt. 25:34). Peace will flow like a river, and the wealth of nations like a flooding stream (Isaiah 66:12). You can almost hear the footsteps of the Messiah.