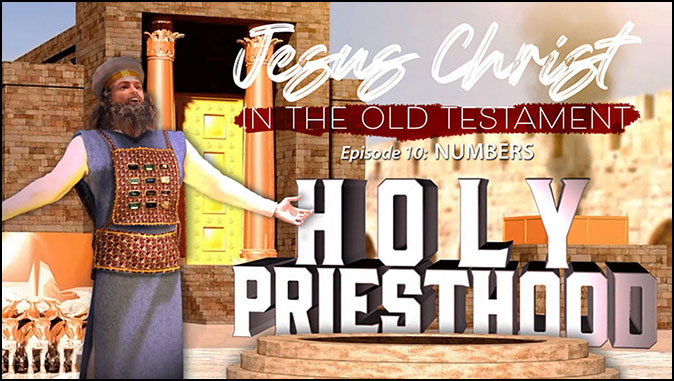 Finding Jesus in Numbers: The Wilderness Wanderings
By Nathan Jones

In the first segment of this series, we began to see if Jesus Christ can be found in the book of Numbers by focusing on God’s holy priesthood and various symbolic imagery. We were joined by our Christ in Prophecy television program guest, Avi Mizrachi, who is the pastor of Adonai Roi in Tel Aviv and the founder of Dugit Outreach Ministries. Avi will now explain what application the book of Numbers has for us today.

Tim Moore: A story in Numbers jumps out to the reader about how the Hebrew people were reluctant to enter into the Promised Land. God had instructed Moses to send twelve spies to check out the land, to kind of preview where they were going, so that the people would be ready to move forward and seize their promise. But, they quickly became discouraged when ten of the spies reported, “Oh, we can’t possibly conquer the land. The people are too big there. It’s too difficult!” And so, the Israelites rebelled against the Lord.

In response to the people’s faithlessness, God’s anger was provoked. He burned to the effect, “How long will these people spurn me? How long will they not believe in me, despite all of the miraculous signs which I performed in their midst?” Eventually, God pardoned their sin, but He still sentenced the Israelites to wander 40 years throughout the wilderness.

Likewise, many people today, Jews and otherwise, fail to seize the promises of God because of their unbelief. They fail to recognize the very promises that God is fulfilling before their very eyes, and in doing so, demonstrate their own faithlessness. I’m not talking about just the Jews, but again, many Gentiles as well.

Nathan Jones: Paul encourages those struggling with their faith in God in Romans 8:31 stating, “If God is for us, then who can be against us?” If only we’d put our faith in God and know that He is for us.

When it comes to the Coronavirus pandemic, we can see how frustrated people are these days. They’re scared and frightened. But, just think if we all had the big picture view about Jesus Christ coming soon, and how He is going to put all things right when He sets up His Kingdom of peace, righteousness, and justice on this earth. Well, I think our lives would be a lot more relaxed, wouldn’t you say?

Avi Mizrachi: Yes, I totally agree. The message the Lord tasked me to proclaim whenever I go into churches is to trust in the Lord because He is faithful. Trust Him! Don’t depend on the things of this world. God will shake the world, and He will shake the Church, because He wants us to get rid of all of these world systems that we depend on so much. Rather, He wants us to be totally dependent on Him. I believe the word is, “Trust in the Lord with all your heart, and lean not onto your own understanding, in all your ways acknowledge Him and He shall direct your paths” (Prov. 3:5-6). That is our message to live by today.

Tim Moore: Perhaps the greatest miracle of all, demonstrated both in Numbers and which continues to be demonstrated in my own life, is not just the regathering of the Jews to Israel in this day and age, but rather the fact that God in His graciousness loved and forgave not just the Children of Israel when they rebelled against Him time after time, but He forgave me. He forgives all who put their trust in Him. The Apostle Paul noted in Romans 3:3 when talking about the Jewish people that their faithlessness did not nullify the faithfulness of God. Those reassuring words apply to all of us. God is always faithful!

Tim Moore: God directed Moses to provide Aaron and his sons with a very special blessing to pronounce over the sons of Israel, as contained in Numbers 6:23-26. Avi, could you give us that blessing, reciting it both in English and in Hebrew?

Avi Mizrachi: Yes, I would be glad to do that. But, I want to make one more point before that, if I may.

God led the Israelites around the wilderness for 40 years. During the day God provided a cloud and during the night He provided a pillar of fire. Most say, “Well, that’s nice.” But, let me explain this to you more. How many people have really gone out into the desert and slept there? I have during my Army Reserve time. I had to train in the desert as practice, and so we troops slept in the desert. Let me tell you two important things about staying in the desert. First, if you don’t have water you die. Second, during the day, it is so hot that you look for a cloud because you need shade.

Back to Israel, God provided them during the day a cloud to give them shade. And, at night when it is freezing out there in the desert, you need to stay by the fire to keep you warm. What did God provide the Israelites at night? Fire. God is the provider during the day and during the night 24/7.

Tim Moore: What a beautiful illustration! I hadn’t considered the purposes for the cloud and fire before.

Avi Mizrachi: Later on in their desert wanderings, we learn that the Hebrew people didn’t have any water for some time. So, God told Moses to touch a particular rock and water would come out. For us today, the Rock is of course Yeshua, Jesus. He is our Provider. He takes care of us.

Nathan Jones: Jesus is the living water, and the water pouring out of the stone points to Jesus our Provider.

Avi Mizrachi: Here is the Aaronic Blessing given in Hebrew in my mother tongue:

And, translated into English:

May the peace of the Prince of Peace be upon you, and your family, and your homes. In Jesus’ name, amen.

The Scriptures command us to pray for the peace of Jerusalem: “Sha’alu Shalom Yerushalayim.” Christians know that the only peace that a person can have is through the Messiah Yeshua, for He is the Prince of Peace. So, please pray for the salvation of the nine million people who live in the land of Israel. Almost seven million Jews and almost two million Arabs dwell in the land of Israel. We desperately need the Savior in our lives.

I also encourage you to pray for the believers in the land, for we are all members of the body of Christ. About 20,000 Messianic Jews live in the land of Israel, serving as a living testimony for Jesus Christ. We meet regularly and we pray together. We are a small body, but we love one another, we respect one another, we pray together often, and we take communion together. So, pray for the body of believers. We have a lot of challenges, and it is not easy, but God is good. God is faithful! Connect with a local body and please pray for us that the kingdom of God will expand throughout the land of Israel.