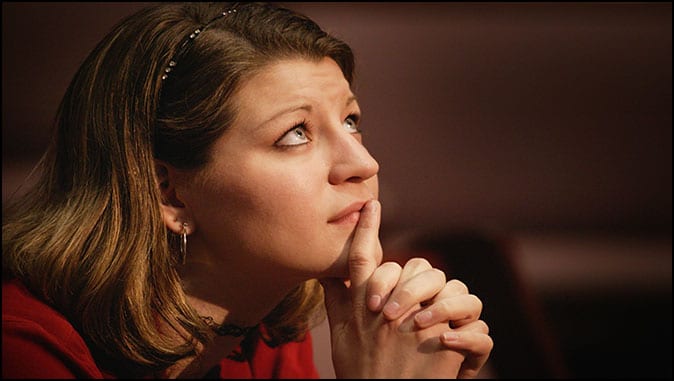 If You Are Faithful to Confess
By Jack Kelley

“This is what you are to offer on the altar regularly each day: two lambs a year old. Offer one in the morning and the other at twilight. (Exodus 29:38-39)

“If we claim to be without sin, we deceive ourselves and the truth is not in us.” If we confess our sins, He is faithful and just and will forgive us our sins and purify us from all unrighteousness (1 John 1:8-9)

Each morning and each evening for as long as the Tabernacle and two Temples stood, the Israelites offered a lamb to set aside the sins of the people. Think of it: 2 lambs every day 365 days a year for over 1200 years. That’s more than 876,000 lambs just for the twice-daily national sin offering.

The purpose of this offering was to prevent the daily sins of the people from interrupting the fellowship between God and His people. Of course there were also numerous other offerings for various purposes, but this one maintained the relationship.

Man’s tendency toward sin is so deeply ingrained in his make-up that it’s literally impossible to separate him from it. As one commentator put it, “We aren’t sinners because we sin, we sin because we’re sinners.” David understood this when he wrote, “Who can discern his errors? Forgive my hidden faults. Keep your servant also from willful sins; may they not rule over me. Then will I be blameless, innocent of great transgression.” (Psalm 19:12-13). David believed that to be truly cleansed, he needed to confess even those sins he wasn’t aware of committing. He understood that our sin nature is so much a part of us that sinning is a natural response to the stimulus of our imperfect environment. It’s our default setting, if you will. David even confessed to being sinful while still in his mother’s womb (Psalm 51:5). So much for the pre-born not being human, or alive.

Since the priests were to keep the morning lamb burning on the altar until the time for the evening lamb and vice versa this national offering was a perpetual covering for the steady stream of unintentional and even unconscious acts of sin committed by the people day and night.

Keep in mind that the Israelites were in a covenant relationship with God and every year on Yom Kippur in their most sacred and solemn ceremony their sins were set aside. Even so the daily offering was required.

I believe that many of the ordinances that were external and physical in the Old Testament became internal and spiritual in the New. So it’s no surprise to discover that the daily sin offering has its New Testament counterpart.

“If we claim to be without sin, we deceive ourselves and the truth is not in us. If we confess our sins, he is faithful and just and will forgive us our sins and purify us from all unrighteousness.” (1 John 1:8-9) John wrote his letters to believers who were already in a covenant relationship with God and whose sins had already been washed away by the blood of Jesus. And yet he admonished them to offer prayers of confession, promising that these prayers would purify them from all unrighteousness. These verses imply that believers still sin, which makes them impure, and need to offer prayers of confession to have their purity restored.

But Paul claimed that if anyone is in Christ he is a new creation, that God made Him Who had no sin (Jesus) to be sin so that in Him we might become the righteousness of God. (2 Cor. 5:21). If so, why do Christians have to offer prayers of confession?

It’s because there are 2 components to our relationship with the Lord. The first is called union. It’s that unbreakable bond that was created when you first believed and the Holy Spirit came to dwell within you (Ephe. 1:13-14). Nothing you do can reverse that; you can’t become unborn. Union is the basis of our relationship.

The second is fellowship. It’s the status of our relationship at any point in time, characterized by 2-way communication and blessing. True, all our sins were taken away at the cross (Colossians 2:13-14), and if we had also been cured of our sin nature when we first believed, John wouldn’t have counseled us to keep on praying for forgiveness. But we weren’t. God fixed it so that our ongoing tendency to sin wouldn’t disqualify us for salvation by paying the penalty for all our sins at once and choosing thereafter to see us as if we had already been made perfect, instead of still being in our imperfect state.

He Who sees the end from the beginning simply looks upon us as we will be not as we are. So for the purpose of our eternity, we are secure because by the time we get there we’ll have been made perfect. “For by one sacrifice He has made perfect forever, those who are being made holy” (Hebr. 10:14). He knows that and has chosen to see us that way even now. This is the new creation Paul described.

And that brings us to the second component. We’re being made holy, because unholy beings cannot dwell in the presence of a holy God. We will one day be changed and made fit to dwell with Him in His Kingdom forever. But that hasn’t happened yet, so to remain in fellowship now we have to “clean up” periodically by seeking forgiveness for the sins we continue to commit. The benefit of staying in fellowship with Him is the incredible blessing and favor we receive from His Hand as He fulfills the role of Good Shepherd described in Psalm 23. Being out of fellowship means losing out on this day-to-day intimacy.

So Union describes our eternal state, while fellowship refers to our relationship in the here and now. The reason so many Christians live defeated lives is due to their failure to understand this difference. They come forward to receive the Lord and solve their eternal problem (union), but miss out on the tremendous blessing He can provide in the here and now (fellowship) by failing to confess when they continue to sin.

The Lord taught the Israelites that even though they were a covenant people who had been granted great and eternal blessing in return for their obedience, they still needed to act daily to preserve their relationship. The required act was a twice-daily sacrifice for sin.

He promised the church even greater blessing in return for our faith. But John admonishes us to act to preserve our relationship as well. The required act is a prayer of confession when we sin. Theirs was a national, external, and physical requirement. Ours is personal, internal, and spiritual.

“Who can discern his errors?” David asked. Which one of us knows each and every sin we commit? We become so adept at rationalizing and justifying our behavior and sinning is so natural to our fallen state, it’s impossible to recognize and remember them all. “Forgive our hidden faults, Lord, and keep your servants also from willful sins; may they not rule over us. Then we’ll be blameless, innocent of great transgression.” Just as our morning shower cleanses us physically, this prayer offered each morning will cleanse us spiritually and restore us to righteousness, qualifying us for the great blessings the Lord has laid up for us in each new day. For if we confess our sins, he is faithful and just and will forgive us our sins and purify us from all unrighteousness. Selah.