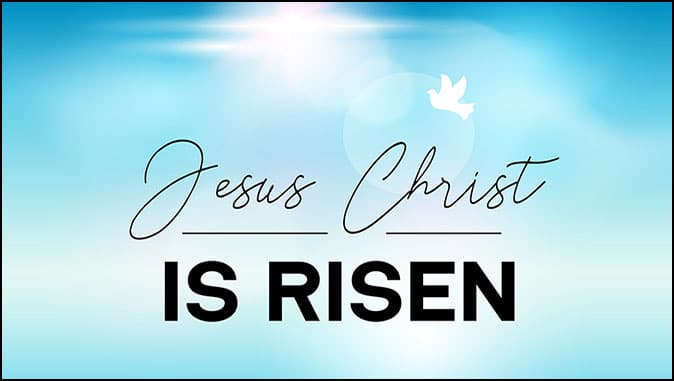 Easter in Three Verses, He Is Risen!
A Bible Study by Jack Kelley

But Christ has indeed been raised from the dead, the firstfruits of those who have fallen asleep. – 1 Corinthians 15:20

When you were dead in your sins and in the uncircumcision of your sinful nature, God made you alive with Christ. He forgave us all our sins, having canceled the written code, with its regulations, that was against us and that stood opposed to us; he took it away, nailing it to the cross. And having disarmed the powers and authorities, he made a public spectacle of them, triumphing over them by the cross. (Col. 2:13-15)

It’s an interesting passage, these three verses, and not often mentioned. But it packs a huge dose of theology.

When you were dead in your sins and in the uncircumcision of your sinful nature, God made you alive with Christ.

We didn’t work our way to this reward. We did nothing to earn or deserve it.  We didn’t even make the first move, earning the right to a response. While we still hated Him, He loved us enough to die for us, as if saying, “Here’s the gift of life, reserved for you. All you have to do is ask to receive it” (Matt. 7:7-8).

“He forgave us all our sins, having canceled the written code, with its regulations, that was against us and that stood opposed to us; he took it away, nailing it to the cross.”

Today we would call this written code with its regulations the list of charges filed with the court; a bill of indictment for all the crimes we’d been accused of. Since the Lord offered Himself “once for all time” the phrase all our sins means a couple of things.  Collectively it means all the sins of mankind, from the first sin of the first man to the last sin of the last one. Individually it means all the sins of our life, past, present, and future.   The Greek word for all literally means each and every sin has been forgiven.

In the Lord’s day, if we had been convicted of  non-capital crimes, a list of them would have been nailed to the door of our prison cell, along with the sentence we’d received. As we served our time, paying our “debt to society” as they called it, the intervals would be marked off until at last we had served our full sentence. At that time we would be handed the list, and the Greek word tetelesti, which means paid in full, would be written across it as proof we had completed the term of our sentence.  This would be our protection against double jeopardy, in case we were ever charged again.

If we had been convicted of a capital crime and sentenced to death, our crimes would have been inscribed on a placard and affixed above our head to the cross on which we hung, as a deterrent to all who passed by and witnessed our agony. Crosses were mounted along side major thoroughfares for maximum public exposure.

As the Lord hung on His cross, the placard above His head read “Jesus of Nazareth, King of the Jews” identifying His crime as treason for all those in the temporal realm to see. But in the spiritual realm a different sign was being displayed. It listed all the crimes against God (sins) that ever had been or ever would be committed during the entire age of mankind. Beside each sin were the names of the all people who had or would commit them. It is this sign Paul describes as being nailed to the cross in Colossians 2:14.

“And having disarmed the powers and authorities, he made a public spectacle of them, triumphing over them by the cross.”

You see, all of humanity’s crimes against God are capital crimes, punishable by death, and we’re all guilty. Satan knew that because of this, all of humanity was forever estranged from God. Jesus had come to reconcile God and man, but now by murdering Him, Satan could make sure that no one could ever rescue mankind. We’d all be lost forever. The moment of his greatest victory was at hand.

But wait! That sign over His head said that the Lord wasn’t dying for any crime He had committed. His name wasn’t even on the list. He was dying in mankind’s place for all the crimes WE had committed. How can this be? It can’t possibly work.

From the cross Jesus cried, “My God! My God! Why have you forsaken me?” He had become the physical embodiment of sin itself (2 Cor. 5:21), and God had to turn away from Him, abandoning Him there. For the first time in eternity the Father and the Son were no longer One. There’s hope yet, the devil must have thought. Even the Father can’t rescue Him! We’ve won after all!

But then Jesus cried out one last time. And suddenly Satan understood. He’d been set up. They were in it together, the Father and the Son. In 1 Cor. 2:8 Paul explained that Satan and his minions didn’t realize this until then, because if they had they would not have crucified the Lord of Glory. They thought that by killing the Christ they could separate us from God forever, but instead they were guaranteeing our reconciliation (Col. 1:19-20).

Later, when John, an eyewitness to the event, wrote down the Lord’s last word from the cross, he used the same Greek word as the one the jailers wrote across the written code when they released their prisoners. “Tetelesti!” Paid in full! We were free. The terms of our sentence had been fulfilled and we could never be charged again. Our long estrangement from God, begun in the Garden, was over.

You see, before the foundation of the world was laid, the Father and the Son had entered into an agreement. Knowing all that was to come, the fall into sin and all its horrific consequences, the Father had said to the Son, “Son, if you’ll die for them I’ll forgive them.” And the Son had replied, “Father, if you’ll forgive them I’ll die for them.” It’s called the Everlasting Covenant, and because of it all who call on the name of the Lord will be saved. And on that central day in history, it had come to pass. The everlasting covenant was fulfilled.

“And having disarmed the powers and authorities, he made a public spectacle of them, triumphing over them by the cross.”

So what was to have been Satan’s greatest victory had become his ultimate defeat. And right there in full view of all the host of heaven. A public spectacle. Humiliated!

And what’s the proof? Resurrection Morning, 3 days and 3 nights later. On that sunny Sunday morning, the tomb broken open and empty, Mary Magdalene and the other women became the first to know for certain what mankind had dreamed about for several thousand years. The Redeemer had come, as promised from the days of Adam. And with His blood shed on the cross He had ransomed all who would accept it from death to life. The empty tomb proved it (1 Cor. 15:17)

Having become so much the embodiment of sin that God couldn’t even look at Him just three days earlier, Jesus had now come out of the tomb ready to sit at the right hand of Majesty. His death had paid in full the price for all our sins. It had to, because He took the blame for all the sin in the history of mankind and if the penalty for even one of them remained unpaid, He’d still be in the grave, still separated from His Father. God cannot abide the presence of sin!

But John called Him the Lamb of God, Who takes away the sin of the world. (John 1:29) All of it. And so here He was all dressed in white, on His way to the Throne in Heaven. His Father was satisfied, His need for justice having been met, they were One again. And as they were one with each other we became one with them. (John 14:20) as righteous as God Himself (2 Cor. 5:21) as perfect as though we had never sinned (2 Cor. 5:17) and destined to dwell in the House of the Lord forever.For by one sacrifice He has made perfect forever those who are being made holy (Hebr. 10:14).

Hallelujah, He is Risen!