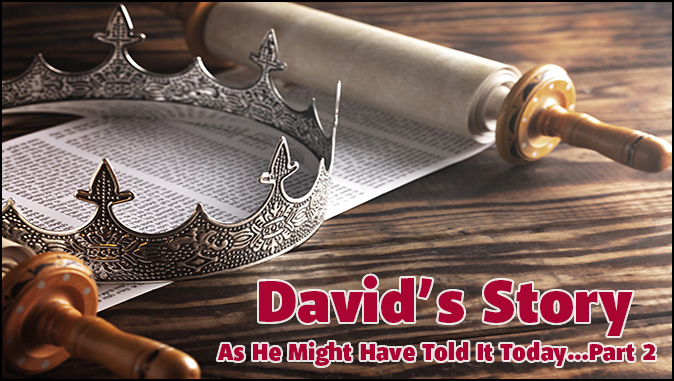 My name translates into English as “beloved” and Jonathon’s is “God has given.” God loved me so much that he gave me Jonathon as a friend.

After defeating Goliath and helping the Israelite army put the Philistines to rout, I was the focus of much celebration, but for some reason neither Saul nor his general Abner recognized me. Of course, they were both very important dignitaries and I was just a growing shepherd boy, barely into my teens, but I had played the harp for Saul and was one of his armor-bearers. When Saul told him to find out more about me, Abner had me brought to them where Saul asked whose son I was. “The son of Jesse of Bethlehem,” I replied. Then he remembered.

Saul’s son Jonathon and I quickly became such good friends that Saul kept me with them, not letting me return to my father’s house. Jonathon and I even made a covenant together, pledging our loyalty to each other forever. As you’ll soon see, in my day such a bond was stronger than even family ties.

Because of my bravery in facing Goliath, Saul gave me a high rank in the army. He put me in charge of some men and sent us against the Philistines again and again. Each time the Lord showed us favor and we were victorious. Before long I was commanding a thousand-man force, and we were really giving the Philistines a bad time.

As we came through the towns of Israel, the women would come out to cheer us, singing, “Saul has slain his thousands and David his tens of thousands!” When Saul heard this, he became exceedingly jealous and began devising ways to get rid of me, suspecting I was trying to take the kingdom from him. (I don’t think he really understood that the Lord had already given it to me.)

One of the rewards promised to the soldier who killed Goliath was to receive the King’s daughter in marriage, so Saul offered me Merab, his oldest. Don’t let his apparent kindness fool you. He continued to send me into the fiercest battles, having decided to let the Philistines kill me for him. This way he would get his daughter back and still look like an honorable man. But I said I wasn’t qualified to enter the king’s family, so Merab was married to Adriel of Meholah instead.

Discovering that his second daughter Michal was in love with me, Saul next offered her to me. He thought she’d distract me with her love and cause me to make a mistake in battle and be killed. This time I explained my situation more clearly. I didn’t qualify to marry one of the king’s daughters because being from a shepherd’s family, I was a poor man and couldn’t afford the dowry of a princess.

Saul made the dowry issue go away, while cleverly devising another scheme to have the Philistines do his dirty work for him. “Just bring me the foreskins of 100 Philistines,” he said, “And that will be dowry enough.” He knew that a Philistine would die before letting his foreskin be taken, and thought that surely 100 of them would be enough to overpower me.

But I was overjoyed. Now I could marry Michal. My men and I went out and slew 200 Philistines and I brought all their foreskins to the King, to be sure I had met the requirement. Soon I was the king’s son-in-law, but Saul was even angrier now. He began to realize that the Lord was with me, not him, and now both a son and a daughter of his were aligned with me as well.

Bringing his closest men together, he instructed them to kill me. Jonathon warned me of this and then tried his best to persuade his father to leave me alone. “He hasn’t done anything to you,” Jonathon told Saul, “In fact, he’s helped you a great deal. Why are you after him like this?” At that Saul promised Jonathon he wouldn’t try to kill me anymore, a promise he would soon break. Just a few days later, as I was playing the harp for the king the evil spirit overpowered him again and he flung a spear at me, trying to pin me to the wall of his house. I ducked and the spear missed, but that night I made my escape from Saul’s house.

But Saul wasn’t done yet. He sent assassins after me to watch my house all night and told them to kill me as soon as I left in the morning. Michal spotted them and pushed me through a back window, urging me to flee into the night.

“You’ll be dead by morning if you stay,” she cried. Then she took our terriphim and laid it in the bed, arranging some goat hair around its head, to make it appear I was sleeping there in case the men stormed our house during the night. (Obviously, Michal and I were not idol worshipers. Terraphim are statues carved in the image of a man. In our day it was a tradition left over from ancient pagan times to demonstrate property ownership. That’s why you’ll sometimes hear terraphim called household gods or household idols.)

Saul was livid when he discovered the next day that she’d helped me get away. “Why did you deceive me and let my enemy escape?” he screamed at his daughter. Michal lied, telling him that I had threatened to kill her if she didn’t let me go.

For my part, I headed straight for Samuel. I needed some protection fast! He was the head of a school of prophets and hid me in their midst. Of course, Saul found out and sent men to capture me. But as they came for me, the Spirit of God came upon them and they began prophesying. This happened with three different groups of Saul’s soldiers. Each time the Spirit of God prevented them from capturing me. Finally, Saul himself came after me, and would you believe this, the Spirit had him doing it too, prophesying all day and into the night!

Through the power of the Spirit, I wrote about the cross, but I actually lived over 1000 years earlier. Back then we didn’t have the indwelling Spirit advising us on every thought and action like you do. The Holy Spirit came upon us from time to time directing us to do things God wanted or preventing us from doing things He didn’t. While I can’t say for sure, it sounded to me like the Holy Spirit was making Saul and his men prophesy about my future as Israel’s king to prevent them from harming me. It was a temporary empowerment, not a permanent one, similar to the way the Holy Spirit came upon the Disciples on the Day of Pentecost making it possible for everyone to understand them regardless of the language they spoke.

Jonathon was still not convinced that his father wanted me dead, so together we contrived a test. It was the beginning of a new month, and according to tradition a time for celebrating. Saul and his family had scheduled a feast and as his son-in-law, I was invited. I told Jonathon I’d be absent and if Saul asked about me to say I was with my family in Bethlehem. If Saul didn’t get mad, we’d know everything was OK, but if he did, we’d know he still planned to kill me. As we hatched our little plan, we also extended our covenant to include our descendants.

On the first day of the feast Saul didn’t say anything about my absence, but on the second day, he asked Jonathon where I was. When Jonathon gave him the excuse we’d agreed on and told his father that he’d given me permission, Saul became furious. “What kind of a son are you?” he demanded, “Why are you shaming your mother and me? Don’t you know that David is trying to steal the throne that by rights should be yours someday? Don’t you care that you’ll never be king as long as he’s alive? Now go bring him to me so I can kill him!”

“Why do you want him dead?” Jonathon asked, barely able to contain his anger, “What has he done?” But Saul threw a spear at Jonathon, trying to kill him, too. Jonathon ran from the house in a rage, and missing the festival meal altogether, hurried to warn me. Upon hearing the news I bowed before Jonathon three times, as a subject before a prince, and we said an emotional goodbye, again vowing our undying friendship, even to our descendants, forever.

My name translates into English as “beloved” and Jonathon’s is “God has given.” God loved me so much that he gave me Jonathon as a friend. Truly without him, I could not have survived Saul’s attacks against me. After Jonathon’s death at the Battle of Beth Shan and my ascension to the throne of Israel, I would expend a great deal of energy finding a relative of his to whom I could show just how much Jonathon’s friendship meant to me. As the King James translators would say 2600 years later, our two souls were knit together in love. (1 Sam 18:1)

If you have such a friend I urge you to do everything possible to nurture and protect the relationship. If you’ve lost one like this, no price would be too great to pay in reconciling. God has given each of His beloved a Jonathon. Who knows but that he or she was meant to be yours.