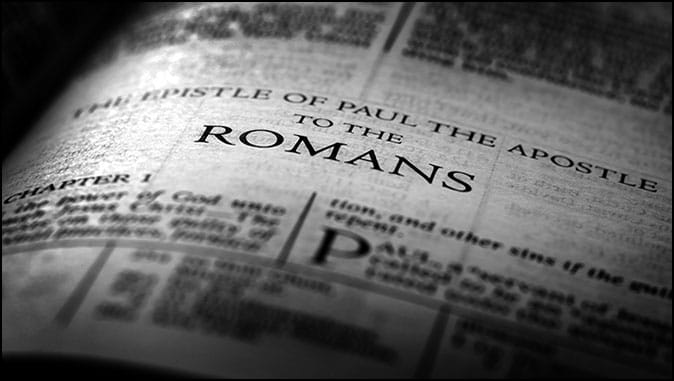 In the final portion of his three-chapter explanation of the relationship between God, Israel, and the Church, Paul explains that though the Jews appear to be enemies of the Gospel, God’s promises to their Patriarchs are inviolable, not conditioned on their behavior. He has preserved a remnant for these times just as He did during the time of Elijah (Romans 11:1-6). And in fact, their opposition to the Gospel has brought great blessing to the Gentile world, opening the door to Salvation to all who would enter. (See Isaiah 49:1-6 for God’s promise that this would happen.)

How Many Times Do I Have To Tell You?

“For I will take you out of the nations; I will gather you from all the countries and bring you back into your own land. I will sprinkle clean water on you, and you will be clean; I will cleanse you from all your impurities and from all your idols. I will give you a new heart and put a new spirit in you; I will remove from you your heart of stone and give you a heart of flesh. And I will put my Spirit in you and move you to follow my decrees and be careful to keep my laws.” (Ezekiel 36:22-27)

This is one of several Old Testament passages explaining that the remnant of Israel would be born again in the latter days. This rebirth would take place both in the political sense (the nation would come into existence again after a 2,000-year absence) and in the spiritual sense (they will be saved by grace just as you and I are). And then God will open the storehouse of blessings He has kept for just this time. Let’s let His Word speak for itself.

“And I will pour out on the house of David and the inhabitants of Jerusalem a spirit of grace and supplication. They will look on me, the one they have pierced, and they will mourn for him as one mourns for an only child, and grieve bitterly for him as one grieves for a firstborn son.” (Zechariah 12:10-11). As all the nations of the world gather against Jerusalem for the great and final battle of the age of man, the remnant of Israel will turn to their Messiah and petition His return. Having caused Him to reject them and leave them (Hosea 5:15) they will finally see the error of their way, admit their guilt, and petition His return (Hosea 6:1-2). “Then the Lord will go out and fight against those nations, as he fights in the day of battle.” (Zechariah 14:3)

“In that day I will restore David’s fallen tent. I will repair its broken places, restore its ruins, and build it as it used to be, I will bring back my exiled people Israel; they will rebuild the ruined cities and live in them. They will plant vineyards and drink their wine; they will make gardens and eat their fruit. I will plant Israel in their own land, never again to be uprooted from the land I have given them,” says the Lord your God. (Amos 9:11, 14-15)

“For I will create Jerusalem to be a delight and its people a joy. I will rejoice over Jerusalem and take delight in my people; the sound of weeping and of crying will be heard in it no more. Never again will there be in it an infant who lives but a few days, or an old man who does not live out his years; he who dies at a hundred will be thought a mere youth; he who fails to reach a hundred will be considered accursed. They will build houses and dwell in them; they will plant vineyards and eat their fruit. No longer will they build houses and others live in them, or plant and others eat. For as the days of a tree, so will be the days of my people; my chosen ones will long enjoy the works of their hands. They will not toil in vain or bear children doomed to misfortune; for they will be a people blessed by the Lord, they and their descendants with them.

Before they call I will answer; while they are still speaking I will hear. The wolf and the lamb will feed together, and the lion will eat straw like the ox, but dust will be the serpent’s food. They will neither harm nor destroy on all my holy mountain,” says the Lord. (Isaiah 65:18-25)

A Time For Blessing

At that time the curse that’s afflicted Planet Earth since Genesis 3 will be lifted. The mountains and the hills will break into song and the trees of the fields will clap their hands. (Isaiah 55:12) There will finally be peace on Earth and good will toward men. Nation will not take up sword against nation nor will they train for war anymore. (Micah 4:3) Even the animals will live in peace. Long lifetimes will return as sickness and disease are dramatically curtailed and Earth is restored to its condition before the fall. In New Jerusalem there will be no more death, or mourning, or crying, or pain for the old order of things has passed away. (Rev. 21:4) And all the people of the Earth will be blessed. (Gen 12:3) For if Israel’s transgression means riches for the world, how much more will their fullness bring! (Romans 11:12)

“Oh, the depth of the riches of the wisdom and knowledge of God! How unsearchable His judgments, and His paths beyond tracing out! Who has known the mind of the Lord? Or who has been His counselor? Who has ever given to God, that God should repay him? For from Him and through Him and to Him are all things. To Him be the glory forever! Amen.” (Romans 11:33-36)