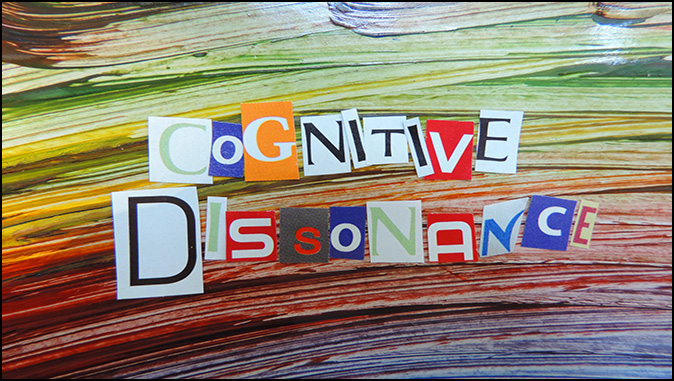 “Son of man, these men have set up idols in their hearts and put wicked stumbling blocks before their faces. Should I let them inquire of me at all?” (Ezekiel 14:3)

The dictionary defines cognitive dissonance as an anxiety that results from simultaneously holding contradictory or otherwise incompatible attitudes or beliefs. To relieve this anxiety the human mind will strive to diminish the relative importance of one of those beliefs in favor of the other.

Jesus warned us that no man can serve two masters (Matt. 6:24) and James said when we pray we must believe and not doubt, because he who doubts is like a wave of the sea, blown and tossed by the wind and should not think he will receive anything from the Lord (James 1:6-8).

God was rhetorically asking Ezekiel if He should let people with idols in their hearts even pray to Him, Jesus was warning us about becoming distracted by wealth and James was referring to wavering faith, but the principle is the same in all three instances. A close personal relationship with God requires wholehearted devotion to Him. These are the prayers God is sure to answer. There can be no cognitive dissonance found in us.

We love the promise from Romans 8:28, “God is working everything together for the good of those who love Him and are called according to His purpose.” But how many of us know that the word translated “love” in that verse is agape? It’s the highest form of love in the Greek language and it means to be totally given over to the object of one’s love regardless of the outcome.

Jesus loved us that way. He gave up His life for us, remember? Romans 12:1 says we should be willing to do the same for Him.   Of course, I’m not talking about our physical life. I’m talking about giving up our version of our future in favor of His. As long as we retain any willfulness or self-determination we’re not offering our whole beings as living sacrifices.  That’s why Paul told us not to conform any longer to the patterns of this world, but to be transformed by the renewing of our minds (Romans 12:2). We’re not to pattern our lives according to the things of this world, but according to His will for us.

Let others lament over our deplorable behavior and our weak faith. I’m going to suggest that the area where Christians in the US today are the most vulnerable has to do with the cognitive dissonance we’ve developed between our desire for the Lord’s return for us and our love of the life we enjoy here. The anxiety this creates in our sub-conscious has caused our longing for the next life to be diminished relative to our desire for the Lord to restore this life to its former levels of enjoyment.

To a degree, this is understandable. For the past 65 years or so the US has been the most preferred place to live anywhere on Earth. Even people who hate America have dreamed of living here. The benefits of American life have been as generous as they have been numerous. Average Americans have typically enjoyed a standard of living that’s beyond the reach of even the privileged few in many countries.

By contrast, the benefits of eternal life with the Lord are undefined and don’t seem real to many. For them, the phrase “pie in the sky by and by” defines the extent of their understanding. I see evidence of this in the letters I get from well meaning people who are afraid we’ll be “confined” to the New Jerusalem, as some have put it, and won’t be able to visit the Earth we’ve grown to love. Others are concerned there won’t be enough room for all of us there, and still others can’t imagine how their new life could be as nice as their current one. If they knew what the Bible says they would have no such concerns.

Whose Fault Is That?

This lack of knowledge is due primarily to the Church’s terrible failure to teach believers about the blessings of the life to come. After all, it is the fulfillment of our life’s purpose. Therefore I guess it shouldn’t come as a surprise that asking God to save our country is a more popular thing to do than preparing to be taken away to begin our eternal adventure with Him. For many of us, returning to the good old days here seems like a better deal than longing for the bliss that lies ahead. But while the Lord never promised to save the USA, He did promise a reward to all who long for His appearing.

“Now there is in store for me the crown of righteousness, which the Lord, the righteous Judge, will award to me on that day — and not only to me, but also to all who have longed for his appearing” (2 Tim. 4:8)

I often wonder how bad things will have to get before people stop dreaming about the past here and start yearning for our future there. I guess time will tell.

To use Ezekiel’s words, The “American way of life” has become an idol we’ve set up in our hearts. We’ve become double minded because of it and if the Lord isn’t already doing so, He’ll soon be wondering if He should even let us pray to Him about it. And remember, no matter how beautiful and desirable something appears to us, if it interferes with our whole-hearted desire to follow God’s will it’s an idol and a wicked stumbling block from His perspective.

Asking Him to extend our time here rather than hasten the day of our departure is a clear sign that we’re not loving Him as He has loved us. It means we haven’t given ourselves completely to Him. When push comes to shove we don’t really want to put aside our plans for the future in favor of His. We’ve enjoyed our time here too much and don’t want to leave just yet.

When Are We Going To Learn?

Paul said everything that was written in the past was written to teach us (Romans 15:4). One lesson we should learn from our study of the Old Testament is that when Israel lined up behind God’s will He blessed them beyond all measure. But when they positioned themselves in opposition, His response was to take away everything they desired more than Him until He was all they had left. It doesn’t take a whole lot of imagination to see that happening in the US today. (Maybe the best way to make life easier for ourselves now is to abandon our version of the future and get behind His.)

According to Bible Prophecy God’s plan for our times is to completely destroy all the nations to which His people have been scattered (Jeremiah 30:11) and give Israel the Kingdom He promised them. In the process He’ll restore Heaven and Earth to provide them with a life that’s vastly superior to anything they’ve ever experienced. But before He can begin these things, He has promised to take the Church to a place filled with wealth and happiness beyond measure where we can be protected from the wrath that’s coming against the unbelieving world (Isaiah 26:20-21, John 14:2-3).

Saying that we want to be raptured before things get bad on one hand, but praying that He will heal our land so we can enjoy a few more years of the “good life” on the other is as clear a case of cognitive dissonance as I’ve ever seen. It’s a wonder He doesn’t just shake His head in utter amazement and walk away forever.

But He won’t. Ready or not He’ll come one day soon and whisk us all away to our mansions in the sky. He’ll do that, not because we’ve longed for it to happen, but because He promised He would. He is God after all. He can’t do anything else. You can almost hear the footsteps of the Messiah.