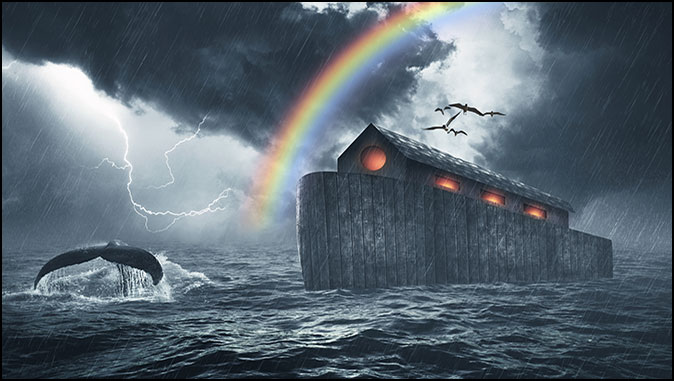 As It Was In The Days Of Noah
By Jack Kelley

“As it was in the days of Noah, so will it be at the coming of the Son of Man” (Matt 24:37). The time leading up to the Great Flood was a lot like our time today in that it was characterized by a deliberate and escalating disregard for the ways of God. Finally “the Lord saw how great man’s wickedness on earth had become and that every inclination of the thoughts of his heart was only evil all the time” (Gen. 6:5).

If you plot the lifespans of the patriarchs in Genesis 5, you’ll discover it was 1656 years from Adam’s creation to the Great Flood. During that time mankind had degenerated from human beings created in the very image of God who walked and talked with Him to a race whose thoughts and actions were totally depraved and bent only on evil (Gen. 6:5). It’s been about 1977 years since man was first given the choice to be re-created by events at the Cross (2 Cor 5:17) but most of today’s world has declined. As a result, a single look around us is all that’s needed to see that from a spiritual and moral perspective life today is becoming pretty much “as it was in the days of Noah”.

What Planet Are You From?

I’ve made mention in previous articles of the mysterious people in Genesis 6:4 called the Nephillim. They were the offspring of marriages between angelic beings and earthlings. Would these beings with super natural strength (origin of the titans or demi-gods in mythology) be called aliens today? In many documented alien encounters there seems to be a great interest on their part in our reproductive system. Are aliens using humans to breed a super race again? In the King James rendering of Daniel 2:43 there’s a curious reference to someone “mingling themselves with the seed of men” in the last days. Is the anti-Christ part alien or in command of beings that are part alien and part human? As it was in the days of Noah?

Out Of The Way

But in all my years of study comparing the days of Noah with the end of the age one insight has recently made things much clearer to me. In Genesis 6:3 God warned of the removal of His Spirit from Earth before the coming judgment. Some see this passage as capping man’s life span at 120 years, but that can’t be its purpose. In Psalm 90:10 we’re told that an average man’s life span is 70 years, and Isaiah 23:15 supports this conclusion. Average life spans before the flood were much longer than 120 years, and after the flood soon became much shorter. Looking at the Genesis lifespans again shows that Shem, probably the last pre-flood man, outlived 8 of the first 9 post flood generations of his descendants, including Abraham.

The fact is that 120 years was the time God gave man to prepare for the coming judgment. He said He was going to remove His Spirit from the earth prior to that judgment. In 2 Thes 2:7 a similar warning is given concerning the end of the age (but without a deadline), and there is confusion over it’s interpretation just as with Gen. 6:3. The only truly literal interpretation of this passage is that sometime before the anti-Christ can be revealed in all his power beginning the Great Tribulation, the restraining force of the Holy Spirit must be taken out of the way (literally out of the midst, or from among).

Then as I was reading Genesis 6 again, the most remarkable thing happened. In my Bible Genesis 6:3 is in the right hand column about 1 inch down the page. I’ve had it high lighted for years. In the left hand column directly across from Genesis 6:3 is another verse I highlighted some time ago. It’s Genesis 5:24 and reads; “Enoch walked with God and then he was no more because God took him away.” Seeing those two high lighted verses side by side like that caused the sequence of events to suddenly become so obvious to me, I don’t know why I hadn’t seen it before. First Enoch was taken alive from earth and the Holy Spirit was withdrawn. Then in Gen. 6:5 man’s behavior is described as having become unbearably wicked and in Gen. 7 the judgment came, in that order.

Enoch’s name means teaching and according to Jude 14-15 he gave the first prophecy of the 2nd coming. Hebrew tradition holds that he was born on the 6th day of Sivan on the Hebrew calendar and was taken by God on his birthday. The 6th of Sivan is the day we know as Pentecost, the birthday of the Church. For these reasons Enoch is often seen as a model or type of the church, whose calling is also to teach the world the ways of the Lord and to talk about His coming.

You Promised You Wouldn’t Do That

The Bible declares that the Holy Spirit is sealed within believers as a deposit guaranteeing our inheritance (Ephes. 1:13-14). Paul wrote that the Holy Spirit will be withdrawn from earth sometime before the anti-Christ is allowed to trigger the judgment known as the Great Tribulation (2 Thes. 2:7). Withdrawing the Holy Spirit with out removing the Church would break God’s promise to us since it would require “unsealing” the Holy spirit from within us. That’s something that God can’t do. “What I have said, that will I bring about,” He declares. “What I have planned, that will I do.” (Isaiah 46:11)

If Enoch is indeed a model of the church and if the Lord’s prophecy of Matt 24:37 is meant to describe the sequence of end times events, as seems likely, then one day soon we will be taken alive (raptured) from earth like Enoch was, and the Holy Spirit will be withdrawn. Man’s behavior will quickly become unbearably wicked and the judgment will come, all in that order. As it was in the days of Noah. Selah.