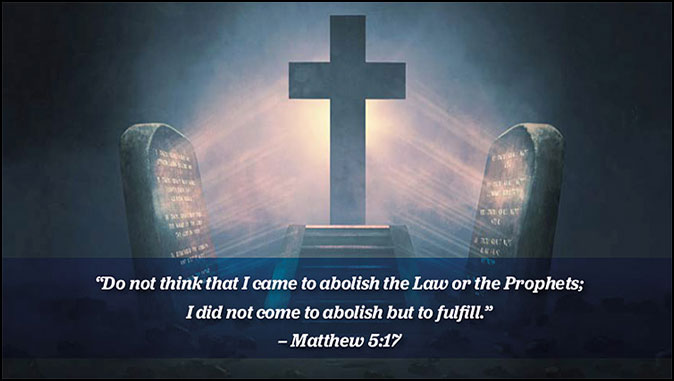 All Things New: Should We Cut the Old Testament Loose?
By Tim Moore

Have you looked at yourself up close in a mirror recently? I mean really, really close — as in a magnifying mirror. Unless you are very young, you’ll find that a magnified close-up is rarely flattering. Every wrinkle and blemish and errant hair (or lack thereof) is exaggerated to our great chagrin.

Whether we see ourselves up close or not, those same blemishes are there on full display every day. These days, more men are hiding behind prodigious beards and long hair. Ladies are able to conceal certain perceived flaws with makeup. But from a very young age, we are all winding down.

The author of Ecclesiastes recognized the apparent futility of this life: “Vanity of vanities! All is vanity” (Ecclesiastes 1:2). Those words of wisdom are attributed to the Preacher, David’s son, king in Jerusalem. Most scholars believe that Solomon penned Ecclesiastes.

If the wisest man who ever lived, who was blessed with riches and a kingdom that expanded Israel’s borders and wealth, lamented such pointlessness, what aspiration for meaning can we have in this life?

The Danger of Overthinking

Pessimism can stem from perceiving too vividly or feeling too deeply. Perhaps the Apostle Thomas doubted so frequently because he had been jilted and disappointed by life too often. Jesus did not harshly condemn his skepticism, but gently encouraged him to embrace evidence of a greater reality.

History offers numerous examples of great men and women who struggle with depression. Abraham Lincoln, William Tecumseh Sherman, Ernest Hemingway, and Winston Churchill all suffered from what used to be called deep bouts of melancholy.

Sometimes, extensive book knowledge can isolate us from the reality of the world around us. Festus’ response to Paul’s testimony about Jesus Christ was to call out in a loud voice, “Paul, you are out of your mind! Your great learning is driving you mad” (Acts 26:24). Paul did not deny the idea that great learning could undermine a firm grasp of reality. Instead, he replied, “I am not out of my mind, most excellent Festus, but I utter words of sober truth.” Paul testified to what he had personally experienced and what he knew King Agrippa would understand based on his own knowledge of current events and the prophets.

Nothing More Than Feelings

It is also possible for feelings to become so intense that they weigh in upon us continually. Post-Traumatic Stress Disorder (PTSD) is a clinical term for the condition that a terrifying or shocking experience can cause. Memories of a traumatic experience and the feelings it caused can trigger flashbacks, nightmares, and severe anxiety. People who suffer from PTSD sometimes have a hard time connecting emotionally out of subconscious fear that they may be hurt again. Other sensitive souls look around at the unending stretches of human suffering and lose hope.

We live in an era where the manifestations of discouragement and despair are evident all around us. Prolonged homelessness, drug addiction, and suicide have reached epidemic levels. Even young people, typically brimming with hope and eager to find their place in the world, are falling victim to unchecked nihilism. Many are embracing anti-social behavior, espousing anarchist propaganda, and resorting to suicide.

Covid protocols did not help matters. Last year two cadets at the Air Force Academy committed suicide toward the end of the academic year, in part because of heavy-handed Covid lock-downs. But even before Covid, teen suicide rates had increased 60% in the preceding 10 years.

Regarding the caution of pitching over into the oblivion of our own minds and our own feelings, Benjamin Franklin offered us this wisdom in his Poor Richard’s Almanac of 1750: “There are three Things extremely hard, Steel, a Diamond, and to know one’s self.” The Lord who made us, said it even better, “The heart is more deceitful than all else and is desperately sick; who can understand it?” (Jeremiah 17:9).

The Value of God’s Word

I’ve seen many people become so enamored with their own learning that they cast themselves adrift from the Christian faith upon which they were raised. Like a ship that casts off from the safety of a harbor into a raging storm, they are soon tossed about by the tempest that is our modern culture.

God’s Word speaks about the origin of Creation, the nature of man, the important difference between men and women, and the ordained relationship of marriage. Perhaps because God was so clear about those ontological distinctions, Satan has hurled his most pointed attacks on these fronts.

Ontological = the area of philosophy and science dealing with the nature of being.

Even within the Church, respect for the full counsel of God’s Word is not universal. Some faithful Christians find themselves drawn toward two extremes relative to the Old Testament. Some discount the entire Old Testament, while others attempt to revert to its Law and ordinances.

Within the first group, we’ve all heard Christians who are quick to proclaim that they are “New Testament Christians” — as if the Bible should be cut in two and the outdated first half relegated to a museum of ancient artifacts. Someone recently complained to me that they didn’t need to hear anything from the Old Testament, since it was irrelevant to their Christian faith.

Even renowned preachers of the Word are not immune from a callousness toward the Old Testament. In 2018, Andy Stanley infamously said, “Hey, it’s time that we face the facts and unhitch our faith and our practice from some of these Old Testament values that we can appreciate in their original context, but we really don’t have any business dragging them into a modern context.” He later complained that his statement was taken out of context.

The heresy he flirts with is called Marcionism, after Marcion of Sinope who embraced Christ but denounced the “malevolent” deity of the Old Testament. He claimed that the New Testament is inspired but dismissed the Old Testament as irrelevant to the Christian faith. Thankfully, the early Church fathers condemned such a view as heretical.

While most professing Christians would not be so bold as to tear the Old Testament from their Bibles, many have described themselves as a “New Testament Christian” — as if that excuses them from having to grapple with the God of Abraham, Isaac, and Jacob. They tend to dismiss the promises made to the Jews and only want to focus on the love and grace offered by Jesus.

Other Christians go to the opposite extreme. They have rediscovered the Jewish roots of the Christian faith and insist that true faith is demonstrated by a fervent adherence to the Old Testament Law. Movements such as the Hebrew Roots Movement try to impose the yoke of Law on themselves and others. Yet Paul rejoiced to be set free from the Law. He and the other apostles were consistent in recognizing that freedom in Christ relieved Jew and Gentile alike from the burden of the Old Testament.

So, what’s the solution? Find out in the next segment!