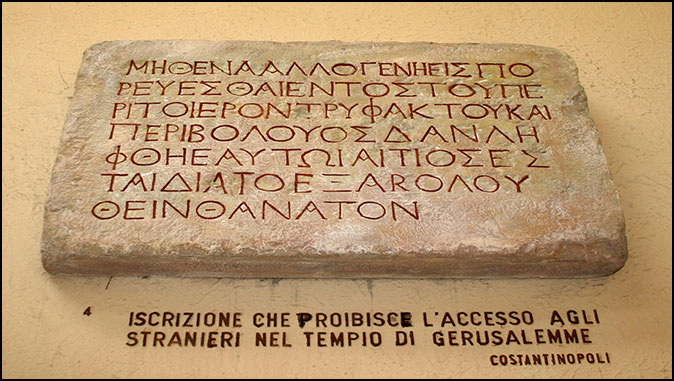 A Scandalous Incident
By Chris Corlett

Luke records in the twenty-first chapter of the Acts of the Apostles a scandalous incident involving Paul in Jerusalem. “The Jews from Asia, seeing him in the temple, stirred up the whole crowd and laid hands on him, crying out, ‘Men of Israel, help! This is the man who teaches all men everywhere against the people, the law, and this place; and furthermore, he also brought Greeks into the temple and has defiled this holy place.’ (For they had previously seen Trophimus the Ephesian with him in the city, whom they supposed that Paul had brought into the temple.)”

Did you catch it? Did you gasp as you read the horror? Paul had been seen walking the streets of Jerusalem with an Ephesian Gentile named Trophimus. And if they walked together in the streets of Jerusalem, then surely they must have walked together in the temple during the purification ritual described early in the twenty-first chapter. Paul was arrested, and the remainder (from chapter twenty-one through twenty-eight) of the Acts of the Apostles records his arrest, imprisonment, and eventual journey to Rome.

A Gentile had limitations regarding access to the Temple. The temple precincts were divided into four courts:

No Gentile was allowed beyond this outer court. “In the year 1871, while excavations were being made on the site of the temple by the Palestine Exploration Fund, M. Clermont-Ganneau discovered one of the pillars which Josephus describes as having been erected upon the very barrier or middle wall of partition, to which Paul refers. This pillar is now preserved in the Museum at Constantinople and is inscribed with a Greek inscription in capital or uncial letters, which is translated as follows:

“NO MAN OF ANOTHER NATION TO ENTER WITHIN THE FENCE AND ENCLOSURE ROUND THE TEMPLE, AND WHOEVER IS CAUGHT WILL HAVE HIMSELF TO BLAME THAT HIS DEATH ENSUES”

Paul refers to this “middle wall of partition (separation)” in Ephesians 2:14 when describing God’s work of uniting both Jew and Gentile in one body – that “He might reconcile them both to God in one body through the cross, thereby putting to death the enmity.” In Acts 20:21 Paul talked to the Ephesian elders about “testifying to Jews, and also to Greeks, repentance toward God and faith toward our Lord Jesus Christ.” When I consider what God did, I hear in my mind the familiar phrase “what God has joined together let no man put asunder.”

“There is one body and one Spirit, just as you were called in one hope of your calling; one Lord, one faith, one baptism; one God and Father of all, who is above all, and through all, and in you all.”

Earlier this month, another mob reaction resulted in a backlash against one man. Dorian Abbot, an associate professor of geophysics at the University of Chicago, was scheduled to speak on climate change at the Massachusetts Institute of Technology. His scandalous act was to propose “university applicants are treated as individuals and evaluated through a rigorous and unbiased process based on their merit and qualifications alone.” Abbot (along with co-author Ivan Marinovic, a professor at Stanford University) pushed back against seeing applicants as part of a group and instead of treating them as individuals.

The first-century scandal in Jerusalem echoes this 2021 dustup in Cambridge. Where one group is pitted against another group, the image of God in which each human being is created is blurred into a sea of undistinguishable heads floating in the waters. God knows the number of the hairs on your head; He knew you before you were formed in your mother’s womb; Jesus saves each one that comes to God through Him; and He spoke individually and directly to (among others) the Samaritan woman at the well as well as to Zacchaeus.

Dorian Abbot warns treating “people as members of a group rather than as individuals (is) repeating the mistake that made possible the atrocities of the 20th century.” His Glorious Church must resist resurrecting a wall that God tore down in the first century. I hear of families who will not share a Thanksgiving meal due to political strife. I hear of churches that segregate the vaccinated and the unvaccinated. There are so many influences that divide and segregate; Jesus died to unite and to be the one cornerstone of the one church. We need to be careful lest we find ourselves guilty of the same mistake in the first century of seeing His Glorious Church as an “us versus them” institution.

Grounded In Reason … The Four Factors Of Faith

Grounded In Reason...The Four Factors Of Faith A Bible Study by Jack Kelley "If you…

Revelations of Paul, & the Mystery of the Rapture – Part 2

Revelations of Paul, & the Mystery of the Rapture – Part 2 By Randy Nettles…

Who Are We, Anyway?

Who Are We, Anyway? A Bible Study by Jack Kelley As we begin another Christmas…

The Good News About Eternity

The Good News About Eternity By Jonathan C. Brentner There’s good news about eternity in…