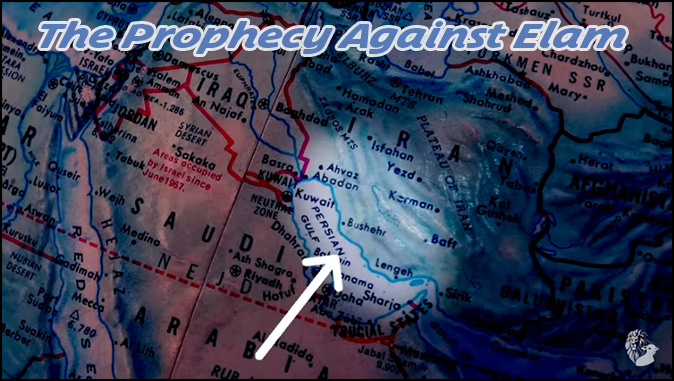 The Prophecy Against Elam
By Nathan Jones

Nathan Jones: Iran has declared that they now have enough nuclear material to build a nuclear weapon, though they might not use it on Israel. Rather, they’re threatening to use their missiles on the United States!

We have finally reached the red line that the former Prime Minister of Israel, Benjamin Netanyahu, so direly warned the world about a few years back. He solemnly warned that if Iran was left to continually build their nuclear enrichment they would eventually achieve a nuclear weapon. Iran’s leaders have announced that they finally have enough fissile material, but as another prophecy teacher reveals, when Iran announces something it usually means they are already on the next step. So, we have to assume that Iran — a hostile nation that funds terrorism throughout the world — already possesses a nuclear weapon.

Where does a nuclear-capable Iran fit into Bible prophecy?

Tim Moore: This question weighs heavy on a lot of Christian’s minds. In one of our recent annual conferences, a guest asked about Iran relative to the prophecy against Elam found in Jeremiah 49. In that chapter, the prophet Jeremiah foretells the destruction that will befall Elam. Elam covers the area of south-western Iran. It’s located very close to the Persian Gulf, just across the Euphrates River, from Iraq and Kuwait. The prophet says that God is going to bring judgment against this portion of what today is called the nation of Iran.

But, I think the principle of God’s judgment applies to all of the nations that in the Old Testament were called out by Him for destruction and judgment due to their idolatry and hatred of Israel. Even the nations of today are going to come under God’s judgment for rejecting God’s Son, Jesus Christ, and for continually cursing His Chosen People, Israel.

And, wow, Iran has really multiplied its curses on Israel over the last 50 years! And, so too, their judgment.

Nathan Jones: Right now Iran’s been waging a proxy war against Israel by supporting the terrorist groups Hezbollah in Lebanon, Hamas and Islamic Jihad in the Gaza Strip, and others. Iran funds their ongoing skirmishes against Israel by providing missiles and materials of war. Every time Israel has to go in and clean out the missiles from Gaza, it’s not too long before these terrorist organizations are restocked within a year or two, and all of this weaponry has been coming from Iran.

Why? Iran wants Israel destroyed and the Islamic Mahdi ushered in. Iran says they’re doing this for the Palestinians, but if they drop a nuclear bomb on Israel, how is that helping the Palestinians? Of course, it won’t. The Palestinians will die at the hands of their supposed benefactors.

When we turn to Jeremiah 49, we can read about God’s judgment against Elam where the Lord Almighty declares, “See, I will break the bow of Elam, the mainstay of their might” (Jeremiah 49:35). What’s interesting about Elam, this southwestern section of what has long been know as Persia, sits along a fault line. Strangely enough, this faultline is also where Iran has been building their nuclear facilities. So, the prophecy could be saying that God will bring destruction to the area of Elam, particularly where their nuclear might — their bow — is positioned.

The Prophecy of the Gog-Magog Invasion

Nathan Jones: In Jeremiah 49:36, God promises, “I will scatter them [Elam] to the four winds, and there will not be a nation where Elam’s exiles do not go.” An Iranian exile is where this prophecy can get confusing in the overall biblical picture, for could God destroy Elam and yet Iran remains to fight Israel in the Gog-Magog War of Ezekiel 38-39? After all, we know Iran will be at its peak of power when it unites with Russia, Turkey, Sudan, and the other Islamic ‘Stan nations.

We’re seeing very recently all over the news Russia’s Vladimir Putin and Turkey’s Recep Erdogan and Iran’s Ebrahim Raisi meeting and conspiring together. The relationship between Russia and Israel has soured greatly as of late, to the point where Russia has been joining Israel’s enemies in holding war games in Syria. Russia’s rhetoric as of late has been constantly threatening to Israel. It appears the Gog-Magog proto-alliance has already formed.

Because Iran cannot be in exile and still fight the Gog-Magog War, I don’t think that God’s going to supernaturally destroy the nuclear reactors and poison the Iranian people so that they flee to the four winds. It’s pretty obvious in Ezekiel 38-39 that God is going to show Himself great to the world by defeating the invaders, and one of those nations is Persia dwelling in their land. The prophetic timeline really does not allow for a long gap to permit an Iranian exile.

Tim Moore: It certainly does not. There’s a reason why Iran hates Israel so much. Every despotic regime tries to distract its people from the terrible conditions and the repression they live under by pointing to a foreign enemy, somebody else whom they can blame for all of their troubles. That’s been happening in the Middle East in most of the Arab nations since Israel was founded. It may be bad in these Islamic nations, but “just look at the terrible things the Jews have been doing to the Palestinians in Palestine.”

Many Arab nations are starting to realize that this blame-game strategy is a fool’s errand. Instead, they’ve been allying with Israel in the Abraham Accords because they recognize that Iran is an even greater threat due to the difference between Sunni and Shiite Islam.

Let’s identify the core of the problem — Iran’s hatred of Israel is satanically inspired. That’s the reason exactly why God is calling out Iran and other nations in these prophecies. Jeremiah 49 is a prophecy not only against Elam but against Ammon and Edom and against any other nations that would dare come against Israel for the purpose of making the Jewish people become extinct.

And so, the Genesis 12:1-3 principle still applies to the nations today. If we do not bless Israel then we will come under the curse of God. What a warning, for America has been a very fickle friend. Even in regard to Iran’s acquiring nuclear material, we have not as a nation kept our eye on the ball or used our influence and clout to stop some of these potential horrors. Our administration’s appeasement will create an arms race throughout the Middle East that will result in an eventual cataclysm.

Nathan Jones: The Middle East nuclear arms race has already begun. Most people don’t talk about Saudi Arabia having bought nukes from either North Korea or Pakistan, for they actually paraded these missiles down their streets a few years ago. So, yes, the race is definitely happening.

What’s amazing is that it doesn’t matter how powerful these nations get, or how much of a threat they become to Israel, God promised through the prophet Ezekiel that when the time comes when the Islamic world becomes an existential threat to Israel, where Israel’s IDF, as powerful as it is, can’t hold its enemies at bay, that God Himself will step back into history. Ezekiel 38-39 foretells how God will send down fire upon the Gog-Magog invaders. Iran and Russia and Turkey’s armies will all turn on each other and then be swallowed up by devastating earthquakes. God will then send fire back on their nations to destroy them so that only a ninth of their people are left alive. So, when a nation comes against Israel, expect the wrath of God.

Now, we know that the Israel of today is a secular nation. But, God still has a plan to bring a remnant out of its people to salvation, and that’s who we’re trying to bless. That’s who we’re trying to protect. We would be called Christian Zionists because we know that one day Jesus Christ is going to return to defeat His enemies. And once He returns in victory, King Jesus will set up His kingdom with the capital located in Jerusalem. That glorious Millennial Kingdom is what we support, and that’s what we look forward to.

Tim Moore: Join with us and looking forward to our Blessed Hope — the return of Jesus Christ!

Extreme Weather in Prophecy (Part 2 of 3)

Extreme Weather in Prophecy (Part 3 of 3)