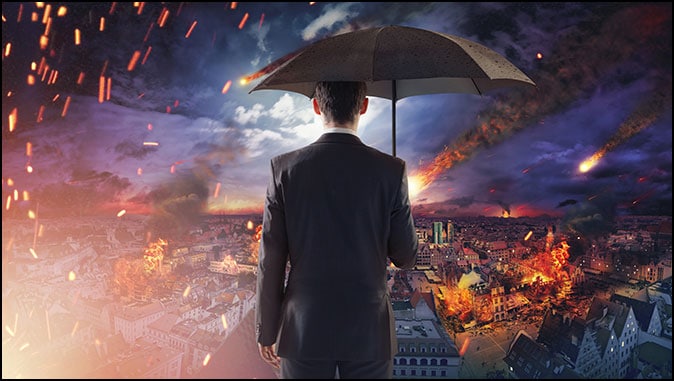 The Indispensable Value of Biblical Prophecy
By Jonathan C. Brentner

In early June of this year, a visit to my long-time optometrist in Iowa revealed what I suspected; I needed a stronger prescription for my contact lens. Shortly after my visit, she ordered them for me.

However, I have not yet received them. I called in July and the man on the phone said the problem was a COVID-19 delay with the supplier. Since then, I have asked for an update on my order via two phone calls and an e-mail, but the office has ignored my requests.

My impatience comes primarily from not knowing what is happening with my order. Three and a half months seem like a long delay even with the virus when in the past it has taken less than two weeks.

As I thought about my experience, it occurred to me that apart from biblical prophecy we would also be in the dark regarding the events unfolding in our world. What if we did not have the book of Revelation to tell us we should expect to see a world government in the last days? What if we did not have Jesus’ words in Mathew 24 that speak of the conditions before His return to the earth?

Biblical prophecy is indispensable today for the following reasons:

Biblical prophecy assures us that God remains in control of everything. It tells us we need not fret as lawlessness and violence grow exponentially around us. It reminds us of God’s sovereignty as we watch the elite push for a Marxist New World Order that will enslave people to the dictates of a few globalists.

Carefully read the following words from Isaiah 46:8-11 as they express how God proclaims His sovereignty by revealing the distant future from ancient times:

“Remember this and stand firm, / recall it to mind, you transgressors, / remember the former things of old; / for I am God, and there is no other; / I am God, and there is none like me, / declaring the end from the beginning / and from ancient times things not yet done, / saying, ‘My counsel shall stand, / and I will accomplish all my purpose’…I have spoken, and I will bring it to pass; / I have purposed, and I will do it.”

God loves to predict the future far, far in advance because it substantiates His control over history. It demonstrates that no one can thwart His eternal purposes; He is sovereign over all things and all people.

Apart from biblical prophecy, we might think the world is falling apart. However, biblical prophecy assures us that God remains in control. The Lord long ago predicted that violence and lawlessness would characterize the last days. He told His prophets about all the things now taking place in our world.

A dear friend of mind came to Christ because of biblical prophecy. During the time he worked at a campus job while he attended UCLA, his boss shared with him how Jesus fulfilled many ancient prophecies during His first coming. Andy mentioned Psalm 22 as having a particular impact on him. In this Psalm, God revealed to David details of the Messiah’s crucifixion that no one could possibly have known about centuries before it even existed.

As people witness the signs of still future biblical prophecy springing to life before their eyes, many are also turning to Christ as a result.

Whether the prophecies relate to Jesus’ first coming or to the end times, they validate Scripture. Biblical prophecy demonstrates God’s ability to accurately predict the future over two thousand years in advance and if He can do that, then the words of Scripture must be true; the Gospel must be as sure as the rising of the sun.

Whether the prophecy relates to Jesus’ first coming or His predictions regarding the end times, it’s fulfillment draws people to the Savior.

Please know I am not discounting the role of the Holy Spirit in confirming the words of Scripture to us nor how the resurrection validates the claims of Jesus. Fulfilled prophecy operates alongside these to further authenticate the Bible.

Biblical Prophecy Tells Us the Time Is Short

The prophecies found in God’s Word not only validate it, they reveal that the time is exceedingly short before Jesus returns for His church. What the Bible said would happen in the last days is occurring now. Here are some examples:

1. Isaiah 66:8: Isaiah said the latter-day reappearance of Israel would happen in “one day.” This miracle occurred on May 18, 1948 when after a two-thousand-year absence, Israel became a nation again.

2. Isaiah 27:6: The prophet predicted that in the future, Israel would “fill the whole world with fruit.” Israel now exports one billion dollars’ worth of produce each year (see also Ezekiel 36:34-35).

3. Ezekiel 38:10-13: These verses predict a future time when Israel’s wealth will cause the invasion known as the Gog-Magog war. During the last decade, Israel’s wealth has increased substantially with the discovery of vast amounts of natural gas and oil, advances in technology, and some now report the finding of much gold in the Land.

4. Ezekiel 38:1-13: Ezekiel tells us that Russia, Iran, and Turkey will lead a future invasion of Israel while nations such as Saudi Arabia, Bahrain, the United Arab Emirates will merely protest. Today, we see this precise breakdown of nation in the Middle East; Russia, Iran, and Turkey have many troops and much weaponry in Syria while moderate Arab nations are aligning with Israel.

5. Matthew 24:12: Jesus predicted a great increase in lawlessness in the last days. The apostle Paul referred to the coming antichrist as the “man of lawlessness” (2 Thess. 2:3). The fulfillment of Jesus’ words is evident to all.

6. Mathew 24:15: Jesus said that the coming antichrist would desecrate a Jewish temple in the middle of the tribulation. Today the Temple Institute in Jerusalem has recreated all the furnishings for the third temple, prepared the proper clothing for the priests to wear, had the architectural plans made ready for the temple, and is now training Levites to serve as priests.

7. Revelation 13:16-18: John tells us that the antichrist will control all the buying and selling worldwide. Ten years ago, it was difficult to imagine how this could happen, but now the technology exists and much of it is already in place. Who but God could have predicted two thousand years ago that this expertise would exist in our day?

8. Daniel 7:23-25; Revelation 13: Both Daniel and the apostle John reveal the presence of a latter-day beast, a world government that will be able to control the economic activity of the entire earth. As I point out in a couple previous posts, the rich and powerful of our world are moving forward with their plans for just such a world government. Much of the violence, the social control implemented through the response to COVID-19, and the emphasis on climate control all signify efforts to prepare the world for this government and the rise to power of the antichrist.

I could list more signs that tell us we live in the last days. The time is exceedingly short before Jesus comes for His church and the antichrist begins his rise to power.

Biblical Prophecy Reveals Our Need for the Savior

If you are reading this article and do not yet know Jesus as your Savior, please come to Him in faith before it is too late. What we now see in our world is all within the scope of what God told us long ago would occur in the last days of human history as we know it.

Jesus said, “I am the way, the truth, and the life. No one comes to the Father except through me” (John 14:6). Jesus took our place on the cross; He bore the penalty for our sins so that we might inherit eternal life (see John 3:16).

2 Corinthians 5:21 says, “For our sake he made him to be sin who knew no sin, so that in him we might become the righteousness of God.” Despite that fact that all humans sin, no exception (see Rom. 3:23), we can receive Jesus’ righteousness because of the blood He shed for us on the cross.

Once we realize our need for redemption, the next step is to believe. Salvation comes by grace through faith, totally apart from any goodness on our part. Paul wrote this in Ephesians 2:8-9, “For by grace you have been saved through faith. And this is not your own doing; it is the gift of God, not a result of works, so that no one may boast.”

As we call out to the Lord in faith, believing what He says about our sins and His payment on the cross for them, He saves us. Please e-mail me if you have any questions on this or if you take this step.

For those of us who already securely in Christ, God has not left us in the dark concerning our world. He told us what would take place so that when it happens, we would not only believe, but receive encouragement from His Word. The Bible assures us that that the evil plans of the powerful cannot thwart His divine purposes.

Jesus will return for His church before a time of great tribulation on the earth. After that, we will return with our Lord and watch Him establish His rule over all the world seated on the throne of David. Satan cannot stop these things from taking place because God is in control of all things.

I do not know when or even if my contact lens will arrive, but because of biblical prophecy I know my departure from this world is imminent. Although I do not like what I see and at times anger rises inside me because of the wickedness of our time, I rest in the assurance that God remains in control. He said all these things would happen someday and that day has arrived.