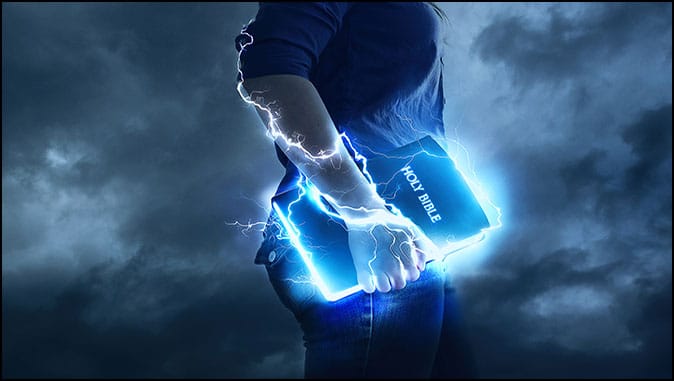 Our primary knowledge of Jesus comes from the Bible. So how is it that so many people say they follow Jesus, but that they don’t trust the Bible? How can a person who doesn’t trust the Bible know that he actually follows Jesus? Jesus — the real Jesus — is revealed in the Bible.

Can we know the real Jesus? Does the Bible provide a faithful record of God’s revelation to humanity? Can we be sure? Yes! The Bible is self-authenticating. That means it proves itself. It does this by way of fulfilled prophecy. Remember that Bible prophecy is not vague like Nostradamus or hit-and-miss like so many modern people who claim to be prophets. It’s specific, and it’s perfectly accurate.

For instance, how could someone two or three thousand years ago make an “educated” guess about 21st century technology? They couldn’t. Yet the Bible says a great deal about it, and it’s right on the money! Because prophecy proves the Bible’s trustworthiness, we can completely trust the Person it points to from Genesis to Revelation — Jesus!

God’s standards for those who claim to speak for Him are high — impossibly high for a charlatan or fraud. The book of Deuteronomy gives two ways to know if a prophet can be trusted. Deuteronomy 18:21-22 addresses the question directly. “And you may say in your heart, ‘How shall we know the word which the Lord has not spoken?’ When a prophet speaks in the name of the Lord, if the thing does not come about or come true, that is the thing which the Lord has not spoken. The prophet has spoken it presumptuously; you shall not be afraid of him.” [NASB]

Start there. Do the prophet’s words come true? God promises to always tell the truth. And since He knows everything, He never has to guess. If someone claims to speak His words, they will get it right because they are getting it from Him. Close doesn’t count. It must be meticulously correct.

It also has to agree with the other things God has revealed. Deuteronomy 13:1-3 says, “If a prophet or a dreamer of dreams arises among you and gives you a sign or a wonder, and the sign or the wonder comes true, concerning which he spoke to you, saying, ‘Let us go after other gods (whom you have not known) and let us serve them,’ you shall not listen to the words of that prophet or that dreamer of dreams.” [NASB]

Even if the prophet seems to perform a miracle, don’t believe the prophecy if it is not consistent with what God has already revealed about Himself. God would never tell people to go after other gods. No true prophet of God would ever say such a thing. The bottom line is that God does not contradict Himself.

With just those two requirements, it’s a miracle (literally) that any of the prophets survived. God set His standard high to filter out the fakes. His word had to be as reliable as Himself. And it is.

That God chose to speak to us proves His loving care. He’s not aloof. He’s interested. Christians don’t just believe that God exists. We believe that He has spoken. He has not left us in silent darkness. He has given us the light of His word. And His word allows us to know, follow, and love Jesus. That’s something to be thankful for every day of every year.

I hope you had a wonderful Thanksgiving. May God richly bless you through the holidays and beyond!

Why Study Prophecy? By Jack Kelley "I make known the end from the beginning, from…

The Prophet, The Priest, And The King

The Prophet, The Priest, And The King By Jack Kelley I think you’ll agree that…