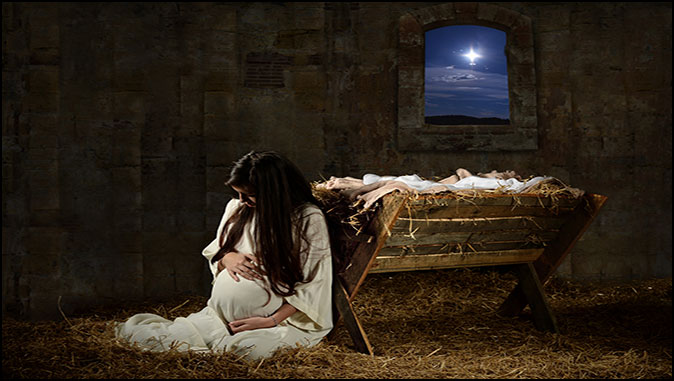 The angel said to me, “Do not be afraid, Mary, you have found favor with God. You will be with child and give birth to a son, and you are to give him the name Jesus. He will be great and will be called the Son of the Most High. The Lord God will give him the throne of his father David, and he will reign over the house of Jacob forever; his kingdom will never end.” – Luke 1:30-33

Stand Up And Be Counted

The next few months flew by and before I knew it, my time to deliver had nearly come. Then the Roman governor really threw a wrench into the works by deciding to conduct a census. Every family in Israel had to travel to their ancestral home to be counted. For Joseph and me that meant Bethlehem since we were both of the tribe of Judah and the house of David. Joseph was a descendant of King Solomon while I came from his brother Nathan’s family. Yes, that means we were actually distant cousins many times removed, but before you get all concerned let me explain that this was proper for two reasons.

First, my father Heli had no sons so as his oldest daughter I was his rightful heir. But the law required I marry someone from the tribe of Judah so my family’s land wouldn’t be lost from the tribal inheritance given to our ancestors in Joshua’s time (Numbers 36:6-9). Joseph was a proper choice under the law.

And second, the angel Gabriel had promised that my son would rule on David’s throne. The problem was that just before the Babylonian captivity, Israel’s kings had become so corrupt that the Lord had put a blood curse on Solomon’s line of David’s family, the royal line of succession, swearing that no biological descendant of Solomon’s after Jehoiachin (aka Jeconiah) would ever again rule over Israel as King (Jere. 22:28-30), and indeed, none ever has; Jehoiachin was Israel’s last legitimate king. This even though the Lord had promised David that Solomon’s descendants would always be Israel’s kings (1 Chron 17:10-14). Since Joseph was from Solomon’s line, he carried this blood curse as did every other living descendant of King Solomon’s.

To fulfill all the prophecies and keep God’s promise to David, the Messiah had to be from the tribe of Judah and the house and lineage of David. (House of David means Jesus had to be a descendant of David’s. Lineage means He had to be in Solomon’s royal line of succession.)

If Jesus had been a biological offspring of Joseph’s He would have been disqualified by the blood curse from ever being the King of Israel. But because I was also from the house of David, and was biologically related to Jesus, I could secure my son’s claim to the throne as long as whoever I married was also David’s descendant and from the royal line. Joseph met this requirement too, and when we married he became Jesus’ legal father. This placed Jesus in the line of succession and fulfilled the requirement that He be “from the house and lineage of David” without making Him liable to the curse. For this reason alone Jesus had to be born of a virgin. It’s the only way any descendant of David’s could ever be qualified to rule as King of Israel. It sounds complicated, but God is bound by his own law, just as we are.

Of course the prophecy that Jesus would reign on David’s throne is unfulfilled as yet. It won’t be fulfilled till his 2nd coming. But because Joseph and I were cousins, it can legally come to pass.

An Uncomfortable Ride To An Unbelievable Destination

If you can imagine being nine months pregnant and riding a donkey for the 60 mile trip from Nazareth to Bethlehem, you know how uncomfortable I was. But we finally did arrive and wouldn’t you know it, every hotel was booked to capacity as we, so exhausted from the journey, were ready to settle for anything. And settle we did. An innkeeper took pity and loaned us his stable. Good thing too, because that very night I gave birth to a bouncing baby boy. When Joseph asked the Lord, “Why a stable?” He replied, “Where else would a Lamb be born?”

In your time there’s a popular Christmas song whose lyrics ask if I knew that this child I had just delivered would soon deliver me. Of course I did, and it made all the mean things that were said about me, all the discomfort I had endured, and all the sorrow I would feel more than worthwhile. I was truly blessed among women.

Some shepherds in nearby fields (tradition says the fields belonged to king David’s great grand parents Boaz and Ruth) were the first to learn of the Messiah’s birth. While out tending flocks of sheep the priests kept there for temple use, an angel informed them of the momentous occasion. Pilgrims bought the lambs from these flocks at Passover and when making sacrifices for sin, so these lambs were born to die for the sins of the people. It’s fitting that the shepherds tending these lambs would be the first to learn that The Lamb born to die for the sins of the people had come.

Traditionally in Israel a first time father would hire musicians to go through town singing the good news that he had a newborn son. We were too poor for that and besides our home town was two days North, but the God of the Universe, our son’s real father, opened the Heavens for choirs of angels to sing the Good News. Joy to the world!

Immediately after Jesus was born, someone handed me swaddling cloths to wrap him in. Contrary to popular belief, these cloths were neither a diaper nor a receiving blanket. They were made from the worn out linen undergarments of the Temple priests. Normally they were woven into wicks for the giant four-branched menorah that stood in the temple courtyard during the Feast of Tabernacles. There were four of these menorah and when lit up they cast a bright light that reflected off the white limestone of the Temple and illuminated the entire city. It was said that they lit up the whole world. These cloths were the perfect things to comfort Jesus, the true Light of the World.

Even the location was significant. Bethlehem translates into English as “house of bread”, a proper place for the One Who is the Bread of Life to begin His mission on Earth, wouldn’t you say?

Kings Will Bow Down Before Him

Some time later we had some very distinguished visitors. Wise Men from Parthia, a powerful country North and East of Israel came into Jerusalem in a large caravan that set the whole city abuzz. Here’s why. Parthia was the current name for the mighty Persian Empire. Their armies had defeated General Pompey and the Roman legions a few years earlier and the memory of that defeat was still fresh in the minds of many. It was like a delegation from a powerful enemy come to visit.

Immediately gaining an audience with King Herod, they asked, “Where is He who is born King of the Jews?” Now Herod wasn’t even Jewish and had been appointed King by the Romans. You can imagine how this question must have startled him. Surely one born to be King would have a superior claim to the throne than a foreign appointee.

But Herod was a clever man. Treating his powerful guests with utmost courtesy, he summoned the priests who, after consulting the scroll of the Prophet Micah, answered, “Bethlehem.” Herod so informed the Wise Men and asked them to let him know of this king’s whereabouts so he could come and pay homage, too. He thought that by being cooperative he might trick them into helping him get rid of a troublesome rival.

When the Wise Men found us, they bowed low and presented gifts of gold, frankincense, and myrrh to Jesus. We learned that gold was prophetic of his kingship, frankincense of his priesthood, and myrrh of his death. (Myrrh is an embalming spice.) These gifts are also symbolic of His three heavenly offices: Prophet, Priest, and King.

When we asked how they knew to come looking for us, they said that ancient prophecies handed down in their priesthood for over 500 years told of a bright star that would appear in the Eastern sky at the appointed time and lead them to the king. Amazingly, they told us these prophecies had originated with the Jewish Prophet Daniel, who founded their order just for this purpose after the Persians had conquered Babylon.

Get Out Of Town

That night they were warned in a dream to stay clear of Herod, so having found Israel’s King they returned home by a different route. Joseph was also warned in a dream that night. An angel told him to take us into Egypt quickly because Herod was out to kill Jesus. We left just in time, because without warning Herod’s soldiers stormed into Bethlehem and murdered all the boys under age two. We stayed in Egypt until the angel told us Herod had died and it was safe to come home.

So finally, after an absence of several years we returned to Nazareth. Our adventure would soon become the greatest story ever told. And our little boy would grow up to be the central figure in human history, God become man, born to die for the sins of his people and ransom us back from the enemy who had stolen us away in the Garden so long ago. It’s the real meaning of Christmas.

Extreme Weather in Prophecy (Part 2 of 3)

Extreme Weather in Prophecy (Part 3 of 3)