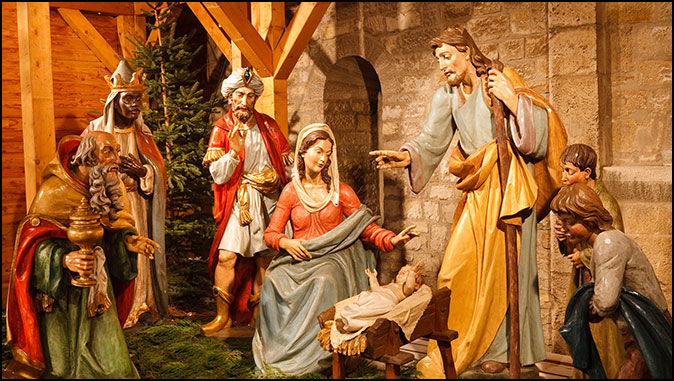 But after he had considered this, an angel of the Lord appeared to him in a dream and said, “Joseph son of David, do not be afraid to take Mary home as your wife, because what is conceived in her is from the Holy Spirit. She will give birth to a son, and you are to give him the name Jesus, because he will save his people from their sins.” (Matt. 1:20-21)

On His eighth day of life, we brought Jesus, as the angel had told us to name him, to the Temple to be circumcised as a child of the covenant. (His Hebrew name is actually Yeshua, which means “God brings salvation.” The name Jesus comes from the Greek.) While there, His role as Israel’s Messiah was confirmed by two witnesses, as required in the Law. (Deut. 19:15) Both Simeon and Anna had been moved by the Holy Spirit to seek out and bless Jesus and praise God for sending Him to redeem mankind. (Luke 2:23-40)

By the way, when the Lord ordained the ritual of circumcision for males, He arranged for the coagulating proenzyme you call prothrombin to be at 130% of normal adult levels on the eighth day of life, and for natural analgesic enzymes in the blood to be at lifetime highs as well. Circumcision on any other day can be a painful and bloody event, but on the eighth day it’s remarkably less so. Of course, this is a fact the medical profession has only learned in the last century. In our day we just knew that everything worked better when we were obedient to God’s commands.

Later in His life, Jesus would say, “Foxes have holes and birds of the air have nests, but the Son of Man has no place to lay his head.” (Matt 8:20) This observation was true from the moment of His birth. It seemed like He didn’t fit anywhere. He was born in a stable because no room could be found for us in Bethlehem. No one but His mother and I were there to attend His birth. Then we had to rush Him off to Egypt to escape an attempt on his life. It happened like this.

Parthian priests known as the Magi arrived in Jerusalem, following a star that had appeared in the skies over Israel. Many centuries earlier Balaam had prophesied that such a star would be a sign of the coming Messiah. (Numbers 24:17-19) For over 500 years, ever since the Prophet Daniel had first told them when to expect it, the Magi had been looking for the sign of His birth, and it had finally appeared. Upon arriving they called on King Herod, informing him that one “born to be King of the Jews” had come. They asked him where the child was and of course he didn’t know.

The Magi’s caravan caused quite a stir in Herod’s court and indeed in all of Jerusalem. The Romans had gained control of the Holy Land, but Parthian forces had defeated them a few years earlier during Rome’s unsuccessful attempt to conquer nearby Parthia, too. (Parthia was a remnant of the former Medo-Persian Empire situated north and east of Israel.) So the Magi were viewed as representatives of Rome’s enemy.

Not only that, but traditionally the Parthian Priesthood played the role of Kingmaker, in neighboring lands as well in their own country. They had become so powerful that no King in the region could long rule without their blessing. Having been appointed by Rome, Herod was not even Jewish, and now these powerful kingmakers were asking the whereabouts of the one born to the throne Herod had only been appointed to.

In answer to their question, Herod called in the chief priests who read from the scroll of the Prophet Micah (Micah 5:2) that the Messiah would be born in Bethlehem. The Magi found us there and presented gifts of gold, frankincense, and myrrh to Jesus. These three gifts were part of the treasure Daniel had left in the Magi’s care when he died in Babylon over 500 years earlier. He made them promise to keep it for the Messiah and present it to Him when they saw the sign in the sky.

The gold symbolized His royalty, the frankincense His priesthood, and the Myrrh was prophetic of His death for the sins of the people. (Myrrh is a spice used for embalming.) Together they represented the Messiah’s three offices of King, Priest and Prophet. Then in a remarkable contrast to the treatment Jesus had here-to-fore received since coming to Earth, these powerful Magi and their entire entourage bowed low and worshiped our son.

An angel warned me in a dream that King Herod was plotting to kill Jesus, viewing our newborn as a threat to his rule, and told me to take Him and His mother to Egypt immediately. The same angel also warned the Magi of Herod’s evil intentions and warned them not to let him know where we were. When they left town they took a circuitous route around Jerusalem to avoid any further contact with him.

Because of Daniel’s gift, we were able to flee and remain in Egypt till the angel told us that Herod had died and it was OK to return home. Later we found out that after we left Bethlehem, Herod’s soldiers had executed all the male children there under the age of two in a gruesome attempt to kill Jesus. This had been prophesied by Jeremiah (Jere. 31:15) but was no less painful for all the mothers whose sons were brutally murdered on that day.

Finally, after an absence of several years, we returned to Nazareth and began a more normal life together as a family. During her pregnancy, Mary and I had abstained from any intimate relations in honor of the Holy Child growing within her. Now we decided to start the rest of our family and wound up having four more sons. These half-brothers of Jesus had a predictably hard time relating to Him, fulfilling the prophecy of King David, ”I am a stranger to my brothers, an alien to my own mother’s sons.” (Psalm 69:8) Can’t say as I blame them. I had a hard time with it myself. How’d you like having the Son of God growing up in your home, knowing that one day you’d have to bow before Him as King of the Universe? But we got used to it, and obviously He went out of His way to make it as easy as possible for us. After His death, His brothers James and Jude performed mighty works on His behalf.

In accordance with our customs, I was responsible for our son’s general education and taught Jesus my trade, carpentry, as well. In matters of scripture, however, He needed no instruction. I remember a time when He was twelve. That fall He completed His ritual admission into manhood by observing His first Yom Kippur fast and publicly reading from the Torah. The following spring we were in Jerusalem for the Passover as the Law required. We thought He was with our group as we left on our trip back to Nazareth, but after a day’s journey we hadn’t seen Him so we left the others and returned to Jerusalem to find Him. Three days later we found Him in the Temple among the teachers, who were amazed at the depth of His knowledge and understanding. (Luke 2:41-52)

Well, His mother and I had been beside ourselves with worry. I mean, how would you feel, fearing you might have lost God’s only son? We couldn’t resist chastising Him for causing us so much grief. When He answered that we should have known He’d be in His Father’s house, we were confused and didn’t understand. Later the meaning dawned on me. First, He was reminding us that according to our Law, He was now a man, responsible for His own behavior. An answer like that to justify going off on one’s own would have been an unthinkable impertinence to a boy’s parents otherwise. And second, He was reminding us that He was God’s Son. Did we think that after all that had happened, His Father would let Him be lost before completing His mission?

It wasn’t always easy being the parents of the Son of God. But before you laugh me to scorn, have you ever caught yourself thinking that some work of God’s would be doomed to failure if you dropped the ball? That’s a burden He’s never asked you to carry. He’s the one boss who doesn’t hold you responsible for the actions of others. He is even faithful to complete the good work He’s begun in you. (Phil. 1:6) As humans we tend to overestimate the importance of our efforts on His behalf. Sure He loves us beyond measure, but He knows better than to let the success of His plans depend on our faithfulness.

As I write this I’m reminded of Elijah after the Mt. Carmel exhibition. He thought he was the only faithful one left in all of Israel. The burden was too much for him to carry and he ran off into the wilderness, afraid for his life. As the Lord comforted Elijah, He explained that there were in fact 7000 others just as faithful as he was. (1 Kings 19:1-18)

Well as you know, Jesus grew up to be the central figure in all of human history, in spite of His all-too-human parents. By His vicarious atonement, He rescued everyone who would permit it from the unspeakable and eternal horror due them as punishment for their sins. He left this world just as He had come into it; alone, misunderstood, and feared, even though throughout His life He had personified the indescribable love of God and never turned away anyone who came to Him.

And He’s still like that today. Every one who asks receives, all who seek find, and to whoever knocks the door is opened. (Matt. 7:7-8) No life is too depraved, no sin too despicable, for the Son of Man came to seek and save those who are lost (Luke 19:10) that they may have life, and have it abundantly (John 10:10).

He’ll be back soon to take those who have accepted the pardon His death purchased for them to the place He’s been preparing all these years. If you’re not sure you’d be included if He came today, just apply the Apostle Paul’s admonition. For if you confess with your mouth, “Jesus is Lord” and believe in your heart that God raised Him from the dead, you will be saved. (Romans 10:9)

If you sincerely believe that Jesus is the Son of God, that He went to the cross for you, and that God raised Him from the dead to prove that the price for your pardon had been paid in full, you’ll be counted among those for whom He comes. The day of His return is almost upon us. I hope to meet you then as, in the twinkling of an eye, you step across the stars to enter your eternal home, where you’ll dwell with the Lord forever. Merry Christmas.

Thy Kingdom Come By Dave Hunt This phrase is contained in the so-called "Lord's prayer,"…

The Dragon and the Manger

The Dragon and the Manger By Hal Lindsey Dragons make fine fiction. In the old…