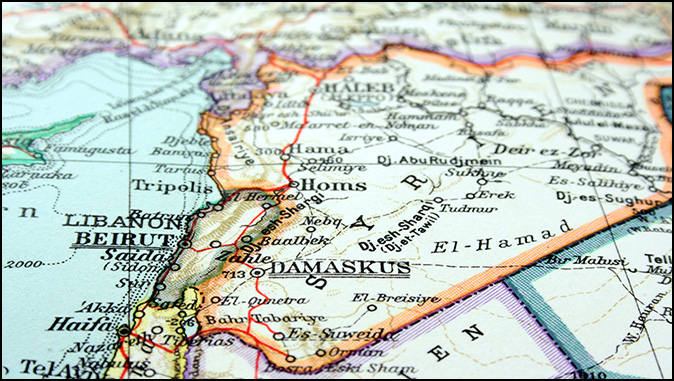 “See, Damascus will no longer be a city but will become a heap of ruins. The cities of Aroer will be deserted and left to flocks, which will lie down, with no one to make them afraid.” – (Isaiah 17:1-2)

Because of the language of these verses, many scholars believe that this prophecy was only partially fulfilled when the Assyrians defeated the Arameans and overran their capital, Damascus, in 732 BC. To this day Damascus is thought to be the world’s oldest continuously inhabited city with a 5000-year history and a population close to 2 million, yet Isaiah 17:1 indicates that it will one day cease to exist.

Some believe the phrase “cities of Aroer” refers to Aramean territory east of the Jordan River around the Arnon River, which flows into the Dead Sea in southern Jordan. However, the Jewish Encyclopedia claims that this phrase in Isaiah 17:2 is probably translated incorrectly, because of its geographical distance from Damascus. While they say it’s possible that there may have been another Aroer near Damascus, it is more likely that the passage should be rendered “the cities thereof shall be forsaken.” If that’s the correct translation, it would include the Hezbollah stronghold in the Bekaa Valley of Lebanon, which was part of Aramean territory in Isaiah’s time, and is in a direct line between Beirut and Damascus.

“The fortified city will disappear from Ephraim, and royal power from Damascus; the remnant of Aram will be like the glory of the Israelites,” declares the LORD Almighty. “In that day the glory of Jacob will fade; the fat of his body will waste away. It will be as when a reaper gathers the standing grain and harvests the grain with his arm – as when a man gleans heads of grain in the Valley of Rephaim.” – (Isaiah 17:3-5)

This segment speaks of the fall of Samaria 10 years later in 722 BC, and the systematic relocation of everyone showing any leadership tendencies to the far reaches of the Assyrian Empire. This was standard Assyrian policy to reduce the likelihood of subsequent rebellion among their conquered peoples. Jacob and Ephraim are alternate names for the Northern Kingdom, and Samaria was its capital. Judah was the name given to the Southern Kingdom, later changed to Judea in the Greek and Roman eras.

“Yet some gleanings will remain, as when an olive tree is beaten, leaving two or three olives on the topmost branches, four or five on the fruitful boughs,” declares the LORD, the God of Israel.” – (Isaiah 17:6)

Not all the people were dispersed. A remnant remained in the land, casting further doubt on the “lost 10 tribes” hypothesis. It was this remnant that came to be known as the Samaritans in the time of Jesus. (A quick reading of 2 Chronicles 11:16 shows that all 12 tribes were represented in the Southern Kingdom of Judah at the time of the civil war that divided the nation. There are no lost tribes. The Lord has always preserved a remnant of all the Tribes of Israel.)

“In that day men will look to their Maker and turn their eyes to the Holy One of Israel. They will not look to the altars, the work of their hands, and they will have no regard for the Asherah poles and the incense altars their fingers have made. In that day their strong cities, which they left because of the Israelites, will be like places abandoned to thickets and undergrowth. And all will be desolation.” – (Isaiah 17:7-9)

This is another passage that’s problematic for those who try to consign the whole prophecy to history. There is simply no reason to believe that the Assyrians turned to God following their conquest of Aram and Israel. And far from abandoning their cities because of the Israelites, it was the Israelites who were defeated and dispersed. The yet future Jewish attack on Damascus causing the destruction and abandonment of Syrian cities, and the eventual return of the survivors to their God is a much more likely fulfillment. And it could happen soon.

The Israelis have all but announced plans to mount a pre-emptive attack against Iran’s nuclear facilities. Iran and Syria supply the money, weaponry and supervisory manpower for the 16,000 or so missiles Hezbollah has arrayed against Israel. They’re believed to have directed Hezbollah to provoke this attack to demonstrate their combined strength as a deterrent to Israel’s plans. But I don’t think anyone expected Israel’s new government, thought by most to lack sufficient backbone for this kind of thing, to respond so forcefully. Now that they have, the West sees the possibility for a major victory in the War on Terror by knocking out a player or two. Israel has promised to destroy Hezbollah before they stop, and the West may see an opportunity here to punish Syria for killing former Lebanese Prime Minister Hariri last spring. Better stay tuned.

“You have forgotten God your Savior; you have not remembered the Rock, your fortress. Therefore, though you set out the finest plants and plant imported vines, though on the day you set them out, you make them grow, and on the morning when you plant them, you bring them to bud, yet the harvest will be as nothing in the day of disease and incurable pain.” – (Isaiah 17:10-11)

Asshur, father of the Assyrians, and Aram, father of the Arameans were both sons of Shem. Aram’s son Uz is the traditional founder of Damascus. The knowledge of God in the memories of these patriarchs cannot be questioned. It wasn’t that they never knew Him, but that they had forgotten Him, abandoned Him in favor of the Canaanite gods of the region, Baal and his consort Ashtoreth (aka Asherah, Astarte, Ishtar, Aphrodite, Venus.) Currently Syria is almost totally Moslem. Until they return to their Maker and Savior none of their plans and schemes will prosper in the long run.

But return to Him they will. In Isaiah 19 we’re told that in the Kingdom Age there’ll be a highway extending from Egypt to Assyria, and both will stand with Israel to receive the Lord’s blessing. (Isaiah 19:23-25)

“Oh, the raging of many nations- they rage like the raging sea! Oh, the uproar of the peoples- they roar like the roaring of great waters! Although the peoples roar like the roar of surging waters, when he rebukes them they flee far away, driven before the wind like chaff on the hills, like tumbleweed before a gale. In the evening, sudden terror! Before the morning, they are gone! This is the portion of those who loot us, the lot of those who plunder us.” – (Isaiah 17:12-14)

Having conquered both the Arameans and the Northern Kingdom, the Assyrians set their sights on the Southern Kingdom, Judah. Assyria’s King Sennacherib brought his armies almost literally to the gates of Jerusalem, so close his commanders were within speaking distance of the Jewish defenders. On the night before they were to attack, the Lord sent His angel into the Assyrian camp on Mt. Scopus to slaughter 185,000 Assyrian soldiers. Before dawn they had packed up and fled, ending 44 years of conquest. (Isaiah 37:36-38) This time in Israel’s history so parallels the Jewish view of the End Times that Sennacherib is seen by them as a type of the anti-christ, while Judah’s King Hezekiah models the Messiah.

But notice that Isaiah speaks of many nations raging against God’s people, not just Assyria, leading us once again to consider Sennacherib’s defeat as a partial fulfillment.

The phrase “rushing of many waters” is often used to describe a loud voice. Such an escalation would certainly cause an incredible uproar among the nations, and many loud voices.

If you listen carefully, you can almost hear the footsteps of the Messiah.