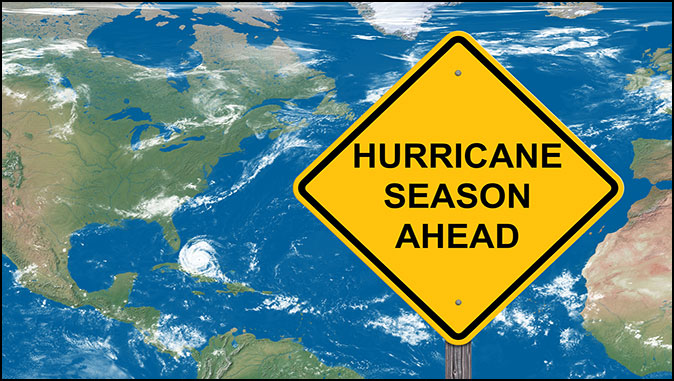 Many people believe that there is nothing that can be known about the return of Jesus Christ because He said that He would come unexpectedly “like a thief” (Matthew 24:42-44). But, while nobody can know the exact day or hour, the Apostle Paul made it clear in 1 Thessalonians 5 that Jesus’ statement about not knowing the season does not apply to believers. Check out this verse: “But you, brethren, are not in darkness that the day should overtake you like a thief.” He then proceeds to explain why, “For you are all sons of light and sons of day.”

God doesn’t wish that any should perish, but that all should come to repentance. Therefore, God always warns before He executes His wrath. And, for thousands of years, God has chosen climactic and catastrophic weather to get our attention. Why? Because God controls the weather! Let’s explore that.

Have you noticed that there’s been a lot of terrible natural disasters breaking out all over the world? To prove this fact, check out this article titled, The World’s Most Extreme Weather Events of 2021 written by Julia O’Driscoll from The Week, which came out on August 31, 2021. She lists 14 of the most tremendous natural disasters that have befallen the world this year.

The first natural disaster on the list is Storm Filomena that afflicted Madrid. They experienced record-breaking snow which left many people stranded. The storm ended up causing 1.6 billion dollars of damage. Madrid just doesn’t see weather events like this lately. Reports say this storm was the worst snowstorm Madrid has experienced in 50 years.

The second natural disaster on the list is Storm Christoph which afflicted the UK. Reports say this storm caused one of the wettest three-day periods on record, affecting both northern Wales and northwest England. Residents there claimed the storm caused a tremendous atmosphere of anxiety and disbelief.

And then Fiji was hit by Cyclone Ana, just after they had already been hit by another cyclone. The cyclone caused 10,000 people to take refuge. Some 318 evacuation centers across the country had to be opened to help the people who’d been hurt by the storm.

This natural disaster affected all of us who live here in Texas. Back in February 2021, we had this tremendous cold snap due to a weather anomaly called a polar vortex. Temperatures dropped to a chilling -5 degrees Fahrenheit or -15 degrees Celsius, which is unheard of in this hot area of the country. Many, many people lost power and had their pipes burst, leaving them without heat and water for days. People froze to death.

A huge dust storm engulfed China. It totally blacked out the skies, causing hazardous breathing conditions for the people who live in that area of the world. The residents of Beijing said the sky turned orange.

Number six on the list of catastrophic weather involved the flooding in both Sydney and New South Wales in Australia. Residents felt the devastating effects of extreme flooding due to heavy downpours which lead to rivers and dams overflowing. Thousands had to be evacuated from their homes.

Indonesia was unfortunately hit by Cyclone Seroja which caused such dramatic aftermath effects as flooding and landslides. Residents claim they hadn’t seen anything like this in decades. Over 22,000 people were displaced and had to flee from their homes because of this natural disaster.

Number eight on the natural disaster list involves record temperatures in Moscow, Russia, as they were scorched by a record-breaking heatwave.

A heat dome formed over the US and Canada in the Pacific region of our country. People there experienced a record heatwave with temperatures nearing a blistering 115 degrees Fahrenheit. While that wouldn’t be too weird for people in some parts of the world, there it was devastating. People living in those milder climates were just not prepared for that sort of hot weather.

Number ten on the list involves the horrific fires raging across the Pacific area of the United States in California and Oregon. The Bootleg Fire was the biggest fire that Oregon claims to have ever experienced. Last reported the wildfire had destroyed 160 homes and ranches.

The floods China experienced were quite awful. Some weathermen said it was the most rain that area of the world has seen in a thousand years.

Wildfires raged across Greece, killing 12 people. Not just Greece, but Turkey and Italy also were plagued by wildfires spreading all over the Mediterranean due to a heatwave.

Fortunately, Hurricane Ida just kind of blew through, but it still left a tremendous amount of damage, especially terrible flooding in New York. The storms were so intense that the floodwaters filled up New York City subway stations. Millions of people were without power.

Not on this list, but more recently, Haiti experienced a terrible earthquake that registered 7.2 on the Richter Scale.

What’s interesting is how scientists are interpreting these unnatural weather phenomena. The article reports: “Scientists long warned that climate change would contribute to an increase in both the frequency and the severity of freak weather.” How interesting that they note an increase in frequency and severity, which are two words that we will come back to in just a moment.

Germany’s Chancellor Angela Merkel warned: “We have to get faster in the fight against climate change. Global leaders also have to come to the same conclusion after the UN delivered a code red for humanity.”

So, the world is interpreting these natural disasters, which are increasing in frequency and intensity, as the result of mankind’s pollution problems. And yet, in the Bible, some 47 different verses declare that God is in control of the weather. Look for instance at Matthew 8:26-27, “What kind of man is this that even the winds and the sea obey Him.” When Jesus stood up in the boat and calmed the storm, He controlled the weather.

Psalm 148:8 says, “Fire and hail, snow and clouds, stormy wind, fulfilling His word.” Acts 14:17 says, “He did not leave Himself without witness, that He did good and gave you rains from heaven, and fruitful seasons.” And, one more, Revelation 7:1, “I saw four angels standing at the four corners of the earth, holding the four winds of the earth, that the wind should not blow on the earth, on the sea, or in any tree.”

Let’s go back to how people are noticing these freak storms have been increasing in frequency and intensity. Jesus said in Matthew 24:8 that the signs of the end times would lead up, or point to, His soon return, and that they’d come on like birth pains. A woman in labor knows that the birth pains start slow and the pain is not too bad. But then, as the delivery goes on, the contractions become more intense and they come more frequently. That leads to the point where it is finally time for the baby to be born.

Likewise, Jesus was saying that the end times signs, which include natural disasters and freak weather, would increase in frequency and intensity, just like birth pains, leading up to His return. God uses these end times signs, such as climactic weather today, to wake us up, calling the world to come back to Him. God is warning us that He is upset with our sin. He is upset with all of the evil that’s going on here on the earth, and He is calling, “Come back to Me!”

The ultimate conclusion to these weather signs is a judgment called the Tribulation. The Lord will rescue, or rapture, His Church out of this world before His true wrath comes upon the world. But, leading up to that time, He is going to increase the signs of natural disasters, just like we are seeing, along with the other signs such as social, political, war, economic, and so on. These disasters will all increase in frequency and intensity leading up to the Rapture of the Church, and then the world will plunge headlong into God’s wrath during the Tribulation. As bad as it has gotten now, today is nothing compared to disasters foretold in Matthew 24 and Luke 21 which will devastate the world during that awful time period.

So, you need to ask yourself, “Am I alert? Do I recognize these signs of the times?” If not, then you need to call on the Holy Spirit and read your Bible so that you can be discerning.

If you don’t yet know Jesus Christ as your Savior, then surrender your life to Him right now. Call upon Jesus in faith and repentance to be the Lord and Savior of your life, and you will be saved. Then you will better understand these signs of the end times.

The Terminal Generation By Jack Kelley “I tell you the truth, this generation will certainly…

The Coming of the Son of Man, Part 1

The Coming of the Son of Man, Part 1 By Randy Nettles The Olivet discourse…

The Coming of the Son of Man, Part 2

The Convergence of Thinking

Isaac And Ishmael, Then And Now

Isaac And Ishmael, Then And Now Perspective by Jack Kelley After this, the word of…