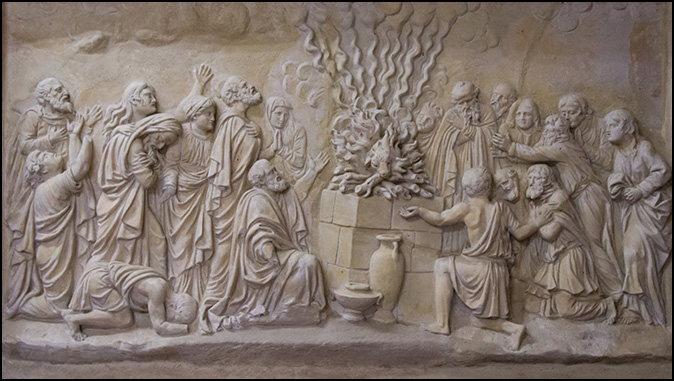 So (King) Ahab sent word throughout all Israel and assembled the prophets on Mount Carmel. Elijah went before the people and said, “How long will you waver between two opinions? If the Lord is God follow Him, but if Baal is God follow him” (1 Kings 18:21)

As King David’s life was drawing to a close, the Lord chose his son Solomon to succeed him. It was the time of Israel’s closest approximation to the Messianic Kingdom promised by God. There was peace in the land and Israel’s influence in the world was with out parallel. Kings from every land came and paid homage to Solomon, whose wisdom was legendary. Solomon reigned in peace and prosperity for 40 years but toward the end of his reign began to pay the price for his one act of disobedience. The Lord had forbidden the Israelites from marrying foreign women, knowing that they would bring pagan gods into Israel and lead their husbands into false religion (1 Kings 11:2). In violation of the Lord’s prohibition Solomon had taken 700 wives and 300 concubines, many of them foreign, and had permitted them to worship their own gods, even building idols of some on a hill east of Jerusalem. This angered the Lord and caused a civil war in Israel that resulted in the Kingdom being divided. Following the death of Solomon, the Northern Kingdom, called Israel and consisting of the land given to 10 of the 12 tribes, descended rapidly into idol worship while the smaller Southern Kingdom, called Judah and consisting of the land given to the remaining 2 tribes, remained faithful to God.

During this time all those in the Northern Kingdom who remained faithful to God migrated south with the Levites (2 Chron 11:16) so all the 12 tribes were represented in the Southern Kingdom. The notion of 10 tribes being lost following the subsequent defeat of the Northern Kingdom by Assyria is not Scriptural, and any doctrine based on the so-called lost 10 tribes is therefore suspect. But that’s a topic for another day.

How Long Will You Waver Between Two Opinions?

For the next 80 years the people of the Northern Kingdom vacillated between allegiance to God and allegiance to various Canaanite deities, sometimes worshipping all of them at the same time. During Elijah’s time there had been a drought in Israel for 3 years, a sign of God’s displeasure with this ongoing flirtation with paganism. Ahab was King of Israel and had married a daughter of the King of neighboring Phoenicia (Lebanon), a powerful and influential woman named Jezebel. She personally supported 450 prophets of Baal and 400 prophets of Asherah. It was these prophets that Ahab summoned to Mt. Carmel in response to Elijah’s “invitation.” In the presence of all the people Elijah (his name means God is Lord) challenged the prophets of Baal to a contest designed to reveal the one true God.

All that morning the prophets of Baal called upon their god. They danced around their altar, and cut themselves with knives, part of their religious practice. At noon Elijah began to taunt them. “Shout louder,” he said, “Surely he is a god. Perhaps he is relieving himself or busy or traveling. Maybe he is sleeping and must be awakened” (1 Kings 18:27). This went on all through the day with no response from Baal. Then at the time of the evening sacrifice Elijah took 12 stones, one for each of the 12 tribes of Israel, and built an altar for the Lord. He dug a trench around it and placed wood upon it. He cut the other bull into pieces and arranged them on the wood. Then he had the people bring 4 large jars filled with water that he poured on the offering and the wood. “Do it again,” he said and they did. “Do it a 3rd time,” he ordered and they did. The water ran down around the altar and filled the trench. And then he prayed. “O Lord, God of Abraham, Isaac and Israel, let it be known today that You are God in Israel, and that I am your servant and have done all these things at your command. Answer me O Lord, answer me, so these people will know that You O Lord are God and that You are turning their hearts back again” (1 Kings 18:36-37). Talk about a grandstand play. Can’t you just feel the tension mounting each time the altar was doused?

Then the fire of the Lord fell and burned up the sacrifice, the wood, the stones and the soil and even licked up the water in the trench. When the people saw this they fell prostrate and cried, “The Lord – He is God. The Lord – He is God” (1 Kings 18:39). Elijah had them seize the pagan prophets and execute them according to Mosaic law (Deut 13:1-5) and shortly thereafter rain fell on the land of Israel for the first time in 3 years, a sign of God’s pleasure. Jezebel swore out a death curse on Elijah but God took him alive into heaven. The people later abandoned God again, judgement came in the form of the Assyrian armies, and the Northern Kingdom ceased to exist.

Your Mission, Should You Choose To Accept It

At the close of the Old Testament, the Lord promised that Elijah would return to earth to herald the coming Messiah. He would once again turn the hearts of the fathers to their children and the hearts of the children to their fathers, or else God would strike the land with a curse (Mal 4:5-6). Jesus said that John the Baptist was the promised Elijah (Matt 17:11-13), and although the hearts of many were turned to God King Herod put him to death. 38 years later the land was struck with a curse, judgement came in the form of the Roman armies and the Nation Israel ceased to exist.

At the end of the age, Elijah will once again bring drought upon the earth at the Lord’s command, and for the 3rd time will implore the people to repent of their sins, and again the hearts of many will be turned to God. The antichrist will think he’s put him to death, but again God will take him live into heaven (Rev. 11:11-12). Judgement will come in the form of the Lord’s armies and the world as we know it will cease to exist.

This Is Your Last Chance

Elijah used 4 jars of water to douse the altar 3 times. 4 is the number of the earth (by the end of the 4th day its creation was complete) and the water can represent the pouring out of the Holy Spirit (see John 7:37-39). If so then the three dousings of the altar hint at Elijah’s three missions to earth offering God’s Holy Spirit and imploring the people to turn their hearts back to Him. After limited success each one ends in failure and is followed by a judgment. Each time the Lord in His mercy provides His people another chance.

The Millennium is man’s last chance; there is no 4th mission for Elijah. But at the end of the Millennium in spite of utopian conditions with Satan bound and 1000 years of personal rule by the Lord Jesus Himself, there’s still enough residual evil in the heart of unregenerate man for Satan to mount a rebellion as soon as he’s freed (Rev 20:7-10). This illustrates man’s total inability to remain faithful to God. In spite of 7000 years of history filled with the undeniable revelations of God’s existence and His endless patience in dealing with us, only the shed blood of Jesus is able to make us fit to dwell in His presence.

Why Study Prophecy? By Jack Kelley "I make known the end from the beginning, from…