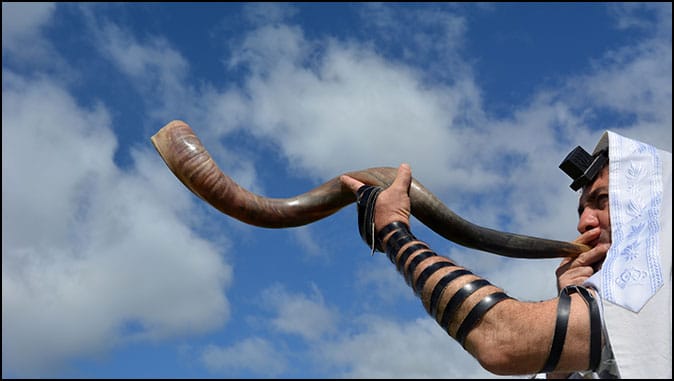 “Then have the trumpet sounded everywhere on the tenth day of the seventh month; on the Day of Atonement sound the trumpet throughout your land.” (Lev. 25:9)

September 27th, 2020 at sundown, the holiest day of the Jewish year will begin. Many who do not observe any other Jewish custom will refrain from work, fast, and attend synagogue services last night and today. The name “Yom Kippur” means “Day of Atonement,” and that pretty much explains what the holiday is. It is a day set aside to “afflict the soul,” to atone for the sins of the past year.

Many religious Jews believe that in Heaven books recording all the deeds of mankind are opened on Rosh Hashanah beginning an annual review of man’s behavior. Those whose behavior has been exemplary in every respect are given another year of life, those who have demonstrated no redeeming qualities are scheduled for death, and those who fit neither category are given 10 days until Yom Kippur to right all the wrongs committed during the year just past.

These 10 days are called the Days of Awe because each man’s destiny hangs in the balance as he goes about asking forgiveness  for sins committed against Him (violations of His Law) and from friends and neighbors for wrongs done to them.  On Yom Kippur, the judgment entered in these books is sealed and the books are closed for another year. So this day is, essentially, their last appeal, their last chance to change the judgment, to demonstrate their repentance and make amends.

Yom Kippur is a Holy Sabbath; no work can be performed. Jews refrain from eating and drinking even water. It is a complete, 25-hour fast beginning before sunset on the evening before Yom Kippur and ending after nightfall on the day of Yom Kippur.

In ancient times, Yom Kippur was the only day of the year when it was permissible to speak the Name of God. During a great and solemn ceremony at the Temple two goats were brought before the High Priest. One was a goat “for the Lord” to be presented as a sin offering as commanded in Lev. 16:7-10. The other was called “the scapegoat” because all the sins of the nation were symbolically placed upon its head, and it was led outside the city. The goat for the sin offering had done nothing to deserve this, but was killed to remind the people that only the shedding of innocent blood could atone for their sins. The death of the two goats symbolically set aside the sins of the nation, made their offering acceptable and gave them another year of peace with their Creator. Lying prostrate before Him the people spoke the Name of God in heartfelt thanks.

Here are a couple of interesting tidbits from Jewish tradition. When the goats were brought before the High Priest, their respective roles in the ceremony were determined by lot. Two golden lots were placed in a golden bowl and as he placed his hand upon the head of each goat, the High Priest reached into the bowl and pulled out one of the lots. Before the cross the goat that was to be presented to the Lord as a sin offering was always on the right hand of the High Priest. After the cross it never was.

While the scapegoat was symbolically receiving the sins of the people upon its head a scarlet ribbon was tied from one of its horns to the door of the temple. Just before the goat was led from the Temple into the wilderness this ribbon was cut in two, leaving some on the horn and some on the door. According to tradition, at a predetermined location outside the city, the goat was pushed off a cliff and fell to its death. All the years before the cross, at the moment of the scapegoat’s death, the piece of ribbon on the temple door turned from red to white recalling the passage from Isaiah 1:18, “Though your sins are like scarlet, they shall be white as snow.” After the cross this never happened again.

The Law Is Only A Shadow…

Some Christians believe that the Lord Jesus began His ministry on Yom Kippur announcing in effect that the judgment that was due mankind would be borne by Him instead (Luke 4:16-21) and that man no longer need live in fear of judgment nor have to endure the 10 Days of Awe every year.

It’s easy to see the Lord in the role of our sin offering, whose shed blood purchased our pardon forever (Hebrews 10:1-4). And at His trial before Pontius Pilate, wasn’t He chosen to bear our sins while Bar Abbas was released? But He was also our peace offering. For God was pleased to have all His fullness dwell in him, and through him to reconcile to Himself all things, whether things on earth or things in heaven, by making peace through his blood, shed on the cross (Colossians 1:19-20). He is our peace, who has broken down every wall (Ephesians 2:14).

So why was the goat chosen for the Lord never on the right hand again? And why did the ribbon no longer turn white at the death of the scapegoat? The One Who had fulfilled the role that the two goats only symbolized had come. It is He Who sits at the right hand of the Father and it is He Who has forever taken away the sins of all who would accept Him. Where the reality has come the shadow is no longer effective. (Colossians 2:17)

The prophetic fulfillment of Yom Kippur will come at the end of the Millennium at the so-called Great White Throne judgment, when all the unsaved dead are brought back to life to be judged according to their works. (Revelation 20:11-15). The books will be opened for the last time and those from all ages who have refused the pardon purchased for them at the cross will bear the full responsibility for their sins against God and man, destined to spend eternity in shame and torment. But those who have accepted the Lord’s pardon are at peace with God, and will spend eternity with Him and shine like the brightness of the Sun. Shalom.