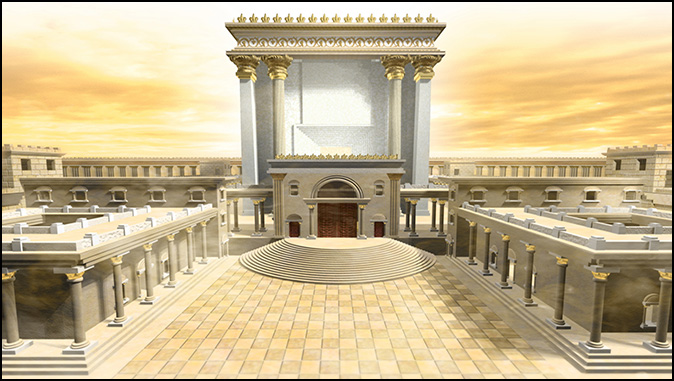 The Bible tells us there will be a third Jewish Temple and that Israel will build it prior to the midpoint of the Tribulation, for it’s at that time the antichrist will defile it.

This prophecy originates with the prophet Daniel, who wrote about the “seventy weeks,” or literally in the Hebrew “seventy sevens,” that God had decreed for the people of Israel.

What does Daniel’s prophecy have to do with the Jesus’ imminent appearing? If the last period of Daniel’s “seventy weeks” is now nearing its start, this verifies that we live in the last days of human history. The scoffers of our day, however, tell us that Daniel’s words are no longer relevant for today and that Israel’s rebirth as a nation was just a fluke of history.

Does this prophecy remain unfulfilled? Yes! Absolutely! As we follow it through Scripture, we not only gain greater clarity regarding it, but also understand why the “seventieth seven” must refer to a still future time.

We find this amazing prophecy concerning Israel and the Messiah in Daniel 9:24-27.

Verses 25-26 provide the starting and endpoint events for the first sixty-nine grouping of seven years, which ended with the cutting off of “an anointed one,” the Messiah. Daniel tells us what will happen after the sixty-nine periods of seven years:

“And after the sixty-two weeks, an anointed one shall be cut off and shall have nothing. And the people of the prince who is to come shall destroy the city and the sanctuary. Its end shall come with a flood, and to the end there shall be war. Desolations are decreed.”

Verse 27 reveals what will mark the start the start of this last period of seven years, a covenant with the antichrist, and what will happen at its midpoint, the desecration of the Jewish temple:

“And he shall make a strong covenant with many for one week, and for half of the week he shall put an end to sacrifice and offering. And on the wing of abominations shall come one who makes desolate, until the decreed end is poured out on the desolator.”

As we turn to the New Testament, we see more references to this “desolator” that Daniel said would someday defile the Temple.

In Matthew 24:15, Jesus referred to desecration of the temple, the event Daniel said would happen at the midpoint of the prophet’s seventieth seven, which we refer to today as the future seven-year Tribulation:

So when you see the abomination of desolation spoken of by the prophet Daniel, standing in the holy place (let the reader understand).

Jesus told His disciples that Daniel’s prophecy regarding the seventieth seven would find its fulfillment in the future, as a sign of the end of the age and of His Second Coming (Matthew 24:3). He regarded it as literal with a still future fulfillment.

The Lord added an important detail to this prophecy saying that Israel would see Daniel’s “desolator” (Daniel 9:27) standing in the “holy place” of the temple.

Paul Identifies the “Desolator” as the Future “Man of Lawlessness”

This prophetic thread regarding Daniel’s seventieth week does not end with Jesus’ prophecy. In 2 Thessalonians 2, the apostle Paul identifies the one who will desecrate the temple as the “man of lawlessness,” or the one we refer to today as the “antichrist.”

“Let no one deceive you in any way. For that day will not come, unless the rebellion comes first, and the man of lawlessness is revealed, the son of destruction, who opposes and exalts himself against every so-called god or object of worship, so that he takes his seat in the temple of God, proclaiming himself to be God.” (2 Thessalonians 2:3-4)

In the above verses, the apostle also tells us how the antichrist will defile the temple. He will enter the temple and there proclaim himself to be God, the God of Israel.

The apostle adds another essential detail in regard to our identification of this “man of lawlessness.” The Lord Jesus Himself will kill him at His Second Coming. In 2 Thessalonians 2:8, Paul says:

“And then the lawless one will be revealed, whom the Lord Jesus will kill with the breath of his mouth and bring to nothing by the appearance of his coming.”

At His return to earth, Jesus will destroy the one that will desecrate the Jewish temple.

In Revelation 13:6, John tells us that the coming beast, the antichrist, will open “its mouth to utter blasphemies against God, blaspheming his name and his dwelling.” This is the guy of Daniel’s prophecy (9:27 and also 11:36) as well as the one Jesus referred to Matthew 24:15.

In Revelation 19:19-20, John writes as an eyewitness to the future destruction of this beast that will desecrate the Jewish temple:

“And I saw the beast and the kings of the earth with their armies gathered to make war against him who was sitting on the horse and against his army. And the beast was captured, and with it the false prophet who in its presence had done the signs by which he deceived those who had received the mark of the beast and those who worshiped its image. These two were thrown alive into the lake of fire that burns with sulfur.”

Just as the Paul wrote in 2 Thessalonians 2:8, Jesus Himself destroys the “desolator” of Daniel 9:27 and Matthew 24:15 at His Second Coming. He throws him into the lake of fire.

The Witness of Irenaeus (AD 130-202) Regarding the Antichrist

Irenaeus, an early church leader, bishop in Lyons, France, and prominent theologian, wrote Against Heresies in AD 180 to combat the spread of Gnosticism in the early church. He was born in Smyrna and received his training in the faith from Polycarp, whom the apostle John himself discipled.

“But when the antichrist shall have devastated all things in this world, he will reign for three years and six months, and sit in the temple in Jerusalem; and then the Lord will come from heaven in the clouds, in the glory of the Father, sending this man and those who follow him into the lake of fire; but bringing in for the righteous times of the kingdom…”

This quote reveals several significant details about his beliefs:

1. Even though Titus had destroyed the second temple 110 years earlier, Irenaeus believed there would be another temple in Jerusalem that the antichrist would desecrate.

2. He said that the antichrist would “sit in the temple in Jerusalem” just as Paul said he would do in 2 Thessalonians 2:4.

3. Irenaeus believed that the antichrist would defile the temple at the midpoint of Daniel’s seventieth week and exert his power for the final three and a half years of it, the last half.

4. Irenaeus said that Jesus Himself would throw the antichrist into the “lake of fire” just as John witnessed.

5. Irenaeus believed in a literal fulfillment of Revelation 19:19-20:3, which is more than a little significant since he grew up in Smyrna, one the first churches to receive the book of Revelation.

Even though his words are not Scripture, they reveal an important understanding regarding the desecration of the Jerusalem temple during the second century AD church. Irenaeus along with many in the early church saw Daniel’s seventieth week of years as awaiting a still future fulfillment.

As we followed the thread of Daniel’s prophecy through the New Testament and into church history, it became readily apparent that it remains unfulfilled. No other explanation fits.

In order for the allegorical interpretation to be true, one must:

– believe that when the disciples asked Jesus for signs of His return, He responded with allegory that did not provide them with any indication whatsoever of what to watch for in regard to the end of the age or His coming.

– assert that Paul responded to the Thessalonians’ panic regarding the start of the Day of the Lord with allegory that would not have alleviated their fears nor given them any clear guidance regarding whether or not this day had begun.

One must do irreparable harm to the words of Scripture to hold to the view that Jesus’ and Paul’s words regarding the defilement of the temple were allegorical.

The historical interpretation regarding Daniel’s prophecy of the desecration of the temple is also impossible. As we followed the thread of his words though the New Testament, we saw that it had not yet happened in AD 95 when John wrote the book of Revelation. And no Jewish temple has been built since that time.

Scripture tells us that the Lord Himself will kill the defiler of the temple at His Second Coming. There is clearly no time in history when this has happened.

The historical interpretation, as well as the allegorical approach, requires that one twist the words of Scripture to fit a predetermined, man-made hypothesis. When one interprets the words of Jesus, Paul, and John in the way they intended, it becomes abundantly clear that seventieth seven of Daniel has not yet happened. It awaits a future fulfillment.

The only interpretation of Daniel’s seventieth week that preserves the integrity of Scripture is the one that places the antichrist’s defilement of the temple at the midpoint of a still future seven-year tribulation.

So What If It Remains Unfulfilled?

The unfulfilled nature of this Daniel’s prophecy in 9:27 signifies that we live in the last days of human history.

It confirms that the miraculous rebirth and supernatural protection of Israel since 1948 were not flukes of history as the scoffers tell us. The intense planning in Israel today to build the third temple is not a just an insane coincidence of time and space, it surely points to the nearness of the seventieth week of Daniel 9:27, and thus to the start of this seven-year period of time.

For us as New Testament saints, the unfulfilled nature of the last week of Daniel’s validates our hope in Jesus’ imminent appearing. We do not live at a time similar to past chaotic and violent times in history, we live in the moments leading up to the seven-year Tribulation and thus to the Rapture that happens before it. Daniel’s prophecy tells us that we are not mistaken concerning the convergence of signs in our day.

During the two-thousand-year gap between periods sixty-nine and seventy of Daniel’s prophecy, the Lord has focused His attention upon the church. However, that must of necessity change with the start of the last period of seven years, which pertain solely to Israel.

This means that the church must be out of here, raptured, before God once again turns His attention to Israel and completes the purposes He announced in Daniel 9:24.

Just as it was through Israel that the Messiah arrived in Bethlehem long ago, so it is through the nation of Israel that Jesus’ reign of righteousness will begin as He takes His seat on the throne of David. The events of the seven-year tribulation will prepare Israel for that moment as God brings them to salvation.

The Rapture must happen before Daniel’s “seventieth seven” because that’s when the Lord will deal with Israel and bring them to repentance just before He appears in His glory (Zechariah 12:10-13:1).