The Counterfeit Miracles of the Antichrist
By Britt Gillette

Not everyone in the world today accepts the message of Jesus. This shouldn’t surprise you. Even many of those who met Jesus refused to accept His message. In spite of the love He offered… In spite of His revolutionary teachings… In spite of His miracles… They rejected Him. Why? Jesus said it’s because such people are children of the devil – the father of lies (John 8:42:44). Otherwise, why would anyone reject Jesus? 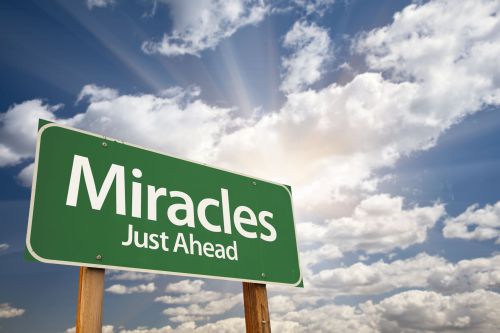 Jesus embodied truth (John 14:6). He gave sight to the blind (John 9:6-7). He opened the ears of the deaf (Mark 7:35). He cured the lepers (Luke 17:14). He even brought the dead back to life (John 11:43-44). His miracles testified to His identity as the Son of God (John 5:36). Still, many of those who witnessed His miracles turned away from Him. Many of those who heard His words did not believe Him. And in the years since, millions upon millions have rejected Jesus as the Messiah.

The “Miracles” of Advanced Technology

Many describe technology as a modern day miracle. Since the Industrial Revolution, we’ve witnessed one technological breakthrough after another. With each passing year, our devices cost less and grow in power. Given current trends, we have no reason to believe this won’t continue right up until the moment Jesus returns.

After all, we live in a world of exponential change. We live in a world where each year technology improves by leaps and bounds. And it’s in this world where the Antichrist will perform his deceptive miracles. How will he do this? I don’t know. But in the near future, he will be able to use new technologies to copy almost every miracle of Jesus. Is it any wonder he will deceive so many people? The Bible says the whole world will follow him. And his “miracles” are one of the reasons they will. But the Antichrist’s miracles won’t be miracles at all. They’ll be fakes.

Keep in mind, counterfeit miracles are nothing new. Pharaoh’s magicians copied many of the plagues God sent on Egypt (Exodus 7:11). Is it any surprise the Antichrist will be able to do the same?

Are You The Messiah?

When John the Baptist sent a messenger to ask Jesus if He was the long awaited Messiah, Jesus responded, “The lame walk. The deaf hear. The blind see…” (Luke 7:22). For John, this was enough. These facts confirmed the identity of Jesus. After all, never in the history of the world had a man restored sight to a man born blind (John 9:32). His miracles proved Jesus was the Messiah.

But very soon, such miracles will be commonplace. Advanced technology such as molecular manufacturing, artificial intelligence, quantum computing, and biotechnology will cure all disease and disabilities. The blind will see. The lame will walk. The deaf will hear. The sick will be healed.

It’s easy to imagine that when that happens, one man will claim credit – the Antichrist.

Let’s look at a few of Jesus’s miracles and how the Antichrist could use future technology in an effort to copy them:

Feeding the Five Thousand – Tasked with feeding a crowd of 5,000 men (and even more women and children), Jesus took five loaves of bread and two fish. He blessed them, broke them into pieces, and had His disciples hand them out to the people. Everyone ate as much as they wanted, and twelve baskets of leftovers were collected (Matthew 14:13-21).

Did you know the dirt in your front yard probably has every element needed to make fish and bread? All you need is a recipe and the means to make them. With the blueprint for a piece of fish or a loaf of bread, advanced technology will be able to do just that. By rearranging matter, you could literally create a fish or a loaf of bread from nothing but dirt. And with enough dirt, you could feed five thousand people. In fact, with enough dirt and the right technology, you could feed the whole world.

In a world of advanced technology, the Antichrist will be able to feed the whole world. And if he did, the world would worship him for it (Revelation 13:4). But again, this would be a false miracle. Man does not live off of bread alone, but from the Word of God (Matthew 4:4).

Water into Wine – The first miracle Jesus performed in public took place at a wedding. When the wine ran out, Jesus told the servants to fill six jars with water. Then, He told them to dip some out and take it to the master of ceremonies. When they did, the water had turned into wine (John 2:1-11).

Advanced technology is on the verge of monumental breakthroughs in medicine. Soon, we’ll be able to replace cancerous cells with healthy ones. Designer antibodies will attack and destroy once deadly viruses. Imagine man-made machines so small they can travel through the blood stream. As they encounter deadly bacteria and viruses, they latch on and disable them, effectively ending all illness and disease.

Some Things Can’t Be Replicated

Again, counterfeit miracles are nothing new. Pharaoh’s magicians appeared to copy many of the plagues God sent on Egypt. But in the end, Pharaoh and his court couldn’t match God’s power over death. Death ultimately came to the firstborn of Egypt (Exodus 12:29).

Likewise, what Jesus did on the cross can’t be copied. He took on the sin of the world, and through Him, we receive forgiveness. Can the Antichrist (or any man) forgive sin? No. Jesus is the only name by which we can be saved (Acts 4:12). He has the power to lay down His life and to pick it up again (John 10:18). He has the power to raise the dead (John 11:44), and He has power to judge the world (John 5:22).

The end times will be a time of great deception (2 Thessalonians 2:10-11). Even though the teachings of Jesus are well known, much of the world continues to look for a messiah – a savior who will end the suffering of this world. The Bible tells us the world will follow the Antichrist. They will marvel at his “miracles.” They will worship him as their savior and god. But it will all be false. It will all be an illusion. Nothing but a counterfeit hope, when real hope is found in Jesus.

Britt Gillette is the founder of End Times Bible Prophecy and the author of Signs Of The Second Coming: 11 Reasons Jesus Will Return in Our Lifetime.

The End Times: Technology By Chris Schang The Bible tells us that in the end…

The Tribulation Judgments Are they sequential and are they natural or supernatural? by Dr. David…